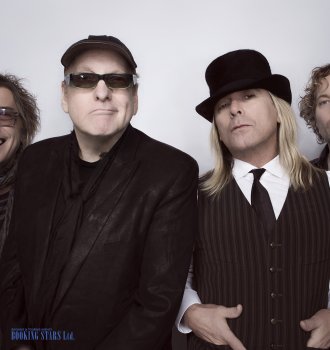 The band was formed in 1974 by Rick Nielsen. Its current members beside Nielsen are Robin Zander and Tom Peterson.

The rock group released its debut studio album, Cheap Trick, in 1977 under the recording label Epic Records. The LP didn’t make it into Billboard 200 but climbed to the 207th position on Bubbling Under the Top. A few months later, the group recorded the second album In Color, which became much more successful. The LP produced by Tom Werman reached the 73rd spot on Billboard 200 and became very popular in Japan and Australia. The group earned international recognition. Fans from many countries wanted to book Cheap Trick for their events. Several years after the release, the album earned a platinum status in the USA and Canada.

The group’s next album Heaven Tonight came out in 1978. Almost all the songs were written by Rick Nielsen. The LP climbed to the 48th spot on Billboard 200 and the 41st position on Canadian Albums Chart. For the first time, the band’s work scored high on the French Albums Chart. Cheap Trick was also very famous in Japan. The LP earned a high position on the country’s chart and was named “American Beatles”.

Heaven Tonight featured the band’s first single to make it into Billboard Hot 100. “Surrender” reached the 62nd spot and entered Australian, Belgian, Netherland, Canadian, and Japan charts. The Rolling Stones Magazine put “Surrender” on its list of 500 greatest songs of all times. The majority of the group’s fans believe that Heaven Tonight is their best album to date.

In 1979, the group released another LP Dream Police, which became the most financially successful album in its history. It climbed to the 6th spot on Billboard 200, reached the 4th position in Canada, and came in second in New Zealand. The LP also earned good scores in six other countries. Just a few months after the release, Dream Police earned a platinum certification from RIAA.

In 1988, Cheap Trick managed to rally and release a very successful LP Lap of Luxury. It reached the 16th spot of Billboard 200 and became 11th in Canada. The album was also popular in other countries. Four singles from the LP made it into Billboard 200. One of them, "The Flame", topped the chart. Another one, "Don't Be Cruel", came in fourth. The LP sold over a million copies and became platinum in the USA and Canada.

Between 1990 and 2009, the band released six studio albums, which weren’t very successful. They took a break in album recording between 1997 and 2003 but continued giving concerts.

In 2011, the band members nearly escaped a fatal accident. When they were performing at Bluesfest, a strong wind gust caused a 40-tonne roof to collapse.

In 2016, after another long break, Cheap Trick released a new LP Bang, Zoom, Crazy... Hello, which reached the 31st spot on Billboard 200. It was the second album, which was recorded with Nielsen’s son Daxx Nielsen (drummer).

In April 2016, Cheap Trick was inducted into the Rock and Roll Hall Of Fame.

In 2017, the band released its 18th and 19th albums We're All Alright! and Christmas Christmas, which were fairly successful but didn’t reach high spots on the charts. Cheap Trick continues writing new music and performing live.