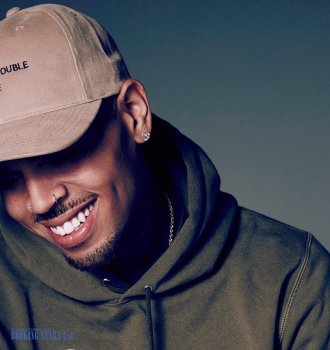 Chris Brown is a famous singer and actor from the United States, performing in R'n'B and Hip-Hop styles.

In 2005, at the age of 16 his first album was released, which included the famous hit «Run It!». Chris received the status of the first African-American singer, whose debut song topped the Billboard Hot 100 chart.

2 million copies of his debut album have been sold worldwide. The second album «Exclusive» was released in 2007 and received platinum certification RIAA.

One of the most successful R'n'B-performers, actor and, finally, participant of one of the most high-profile scandals in the history of show business was born in the city of Tappahannok, Virginia, USA. The future singer became interested in music early, which greatly interfered with his studies. Chris was inspired by the performances of Michael Jackson and Usher, and he tried to imitate them. His parents were pleasantly surprised by their son's talent. At the age of 15, young Chris Brown decides to leave school to devote himself entirely to music.

Work on the first album under the uncomplicated title Chris Brown was completed in 2005. Popularity came immediately: the album immediately burst into the American charts and went double platinum. Less than six months later, Chris Brown is going on a US tour and is releasing a DVD about his travels and preparations for the Grammy Awards.

Not going to stop there, Chris immediately after the end of the tour begins work on a new album. The material has accumulated enough, so that the disc is ready for release in November 2007. The singer's second studio album was named Exclusive and once again conquered the top of the music charts, becoming double platinum not only in the USA, but also in Australia and New Zealand. Critics greeted the artist's new work positively, and Billboard magazine named him the best artist of 2008.

Although Chris Brown's previous work was popular, he decided to experiment and come up with a new sound for the next album. In December 2009, the singer's third disc went on sale. The singles from her were received extremely coldly, which affected the sales of the album. The reason was not only in the unusual sound, but also in the scandal that erupted in connection with accusations of Chris Brown of violence for assaulting his girlfriend, performer Rihanna.

After admitting guilt and undergoing therapy, Chris Brown is working on a new F.A.M.E. album in 2010. and starred in the movie "Raider Boys". Thanks to the support of friends, colleagues and fans, the single Dueces from the new album is number 14 on the Billboard charts, but sales still fall short of the first two records. By the way, Chris's height is 185 cm.

Chris Brown is famous not only for his musical success, but also for scandals in his personal life. The performer has been friends with singer Rihanna since 2005, and in 2008 they officially became a couple. Their relationship ended in 2009 when Chris attacked Rihanna and beat her in the car. According to the singer, the boyfriend tried to strangle her, and after the attack, he disappeared from the police. The deed prevented Chris from living on, and he voluntarily surrendered to the authorities. For his trick, the singer received a suspended sentence and was sent to correctional labor, as well as rehabilitation.

In the interval between relations with Rihanna, Chris met for some time with the Vietnamese model Carucci Tren. Later, Chris Brown publicly stated more than once that he regretted what happened and tried to improve relations with Rihanna. As a sign of his remorse, Brown even got a tattoo on his neck in the form of a beaten woman, who, as the artist himself admitted, will remind him every day of his wrongdoing - just look in the mirror. In 2012, Rihanna and Chris Brown got back together, began to take part in joint performances, photo shoots, music recordings and began to appear as a couple, but the reunion did not last long, and soon the young people made the final decision to leave.

Chris Brown is a great choice for your event! Book a famous singer on our website online!