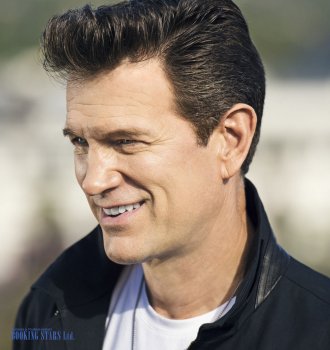 Chris Isaak was born on July 26, 1956, in California. He is an American singer and actor. Isaak is mostly famous for his hits “Wicked Game”, “Baby Did a Bad Thing”, and “Can’t Do a Thing (To Stop Me)”.

In 1985, Isaak established a rockabilly group, Silverstone. The band signed a contract with Warner Brothers, went on a tour of western USA, and released their first album Silverstone, which failed to make the major charts except for the Australian ARIA Charts. Isaak didn’t accept the failure and together with the same grouped recorded an album under his own name.

In 1986, the album Chris Album was released and made it to the 194th spot on Billboard 200, which was a big success compared to the previous LP.

In 1987, Isaak released a single “Blue Hotel”, which wasn’t popular at first but eventually made it into the UK Singles Chart and was recommended as “ the best album of 1987” by USA Today.

In 1989, Isaak released his third album Heart Shaped World, which didn’t get farther than 149 spot in the USA charts, Warner Brothers almost dropped the singer and refused to promote him.

In 1990, Isaak released a single “Wicked Game”, which appealed to the movie produced David Lynch, who asked to use the song for the movie Wild at Heart starring Nicholas Cage. At the same time, Chris wrote a soundtrack for a soap opera Days of Our Lives and a movie The Preppie Murder. When Wild At Heart premiered in the USA, it finally brought Isaak the fame he always wanted. He was noticed by such magazines, as Esquire and Elle and was called one of the most beautiful people in the world by the People magazine.

1991 was the year of great fame for Isaak. His 1989 album was rereleased under the name Wicked Games and reached the 7th spot on Billboard 200. He received several music awards. The Wicked Games music video was recognized as one of the best.

After 1991, Isaak released nine more studio albums that were moderately successful. His latest album First Comes the Night (2015) reached the 32nd spot of the UK Albums Chart and the 66th spot on Billboard 200. He continues to write new songs and perform live.

Chris Isaak is a wonderful choice for your event! Do not miss a chance to invite a star for your event and to listen to the most favorite hits!