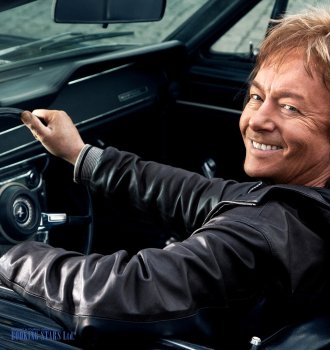 Chris Norman became famous in the 1970s as the leader of the group Smokie. After working with the band for 10 years, he decided to pursue a solo career and achieved excellent results. Some of his most famous songs are "What Can I Do", "'l’ll Meet You At Midnight", and "Living Next Door To Alice", recorded with Suzi Quatro.

Christopher was born on 25 October 1950 in England. Both of his parents were artists so Chris’ future was practically pre-determined. For the first time, Norman performed on stage when he was just three years old. When the aspiring celebrity was a teenager, he already wanted to become famous. When Chris was seven years old, his father bought him a guitar, which helped the singer hone his musical skills. Norman developed a wish to become a rock musician, and his parents supported him.

When the singer was young, his parents were giving many concerts and moving a lot. Norman visited virtually all English towns. Before the family finally settled in Bradford, Chris attended nine different schools.

In Bradford, Chris enrolled in the school for boys where he met Terry Uttley and Alan Silson. They became close friends and formed the band, Smokie. After graduating from high school, Chris’ friends began performing in Yorkshire and other British towns. They sang in clubs and pubs to earn money. Initially, artists called the band, The Yen. Later, they renamed it to Long Side Down. Other names were Essence and The Sphynx.

In 1974, the name was changed to Smokie. In an interview, artists explained that they changed the name due to the vocalist’s husky voice, which sounded like the voice of a heavy smoker. Musicians appeared on stage in white shirts or elegant suits. It was part of the image, which the fans loved.

Between 1975 and 1982, Smokie and Chris Norman released 24 singles and 9 albums. Then, their popularity started to wane. Norman began thinking about a solo career since working with the group wasn’t satisfying anymore. In 1986, he recorded a solo single “Midnight Lady”, which reached high spots on the charts. The same year, he gave last few concerts with Smoke and left the band.

Norman’s popularity in Europe was on the rise. He was invited to many music shows on the radio and TV. In 1986, he received a Golden Europe award from a German TV company SWF. The singer invited other musicians to become part of his band, Chris Norman Band. Between 1987 and 1988, Chris gave numerous solo concerts all over Europe. Many fans wanted to book Chris Norman for private events

In the next several years, Chris recorded many hits and LPs. In 1995, he got a CMT award as the International Video Artist of the Year for his work on "Red Hot Screaming Love", "Jealous heart", and "The Growing Years".

In 2004, Chris caught another wave of popularity after winning a contest on Comeback Show, arranged by the German TV channel, Pro7. Soon after the victory, he recorded the LP, Break Away and the single "Amazing", which became very popular in Germany, reaching high spots on the charts.

In 2005, the artist released a big compilation album, One Acoustic Evening on DVD. It featured instrumental concerts of Chris Norman & Band. The album reached the 5th spot on the German charts.

In 2009, Norman sold numerous copies of the compilation album, The Hits! From His Smokie and Solo Years.

During his solo career, the artist recorded more than 20 albums. He gave numerous concerts, attended festivals, and visited private events.

As of today, the latest album recorded by Chris is Don’t Knock The Rock. It came out in 2017 with the assistance of the artist’s label, Solo Sound Records. The LP featured 14 songs, one of which, “Resurrection”, Norman recorded with a successful guitar player, Geoff Carline.