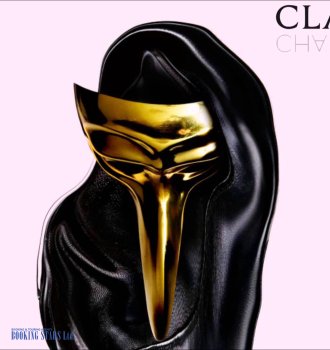 The illustrious Claptone first appeared on the scene with an EP titled “She Loves You”, featuring 4 tracks of soulful house vibes. Not much is known about this mysterious DJ, other than the pointed-nose facemask he wears to conceal his identity with. Tracks from Claptone have been supported by artists such as A-Trak, Solomun, and DJ Sneak.

“Dear Human,” says the paper roll. - Welcome to the world of Claptone. You are here to find out more about me. But be prepared for the fact that we both can reveal more than we intended. My friends will take you to me. You must trust them ... "

The scroll is tied with a bright red ribbon and inserted into the wall of a medieval Berlin monastery along with a golden Venetian plague doctor-style mask. This is the first stage of the interview, which promises to be very interesting.

A musical creature named Claptone desperately hides his real face under a mask, both during DJ or live performances and during interviews, and it is rumored that during sex. In fact, today we are going to have the very first interview of this mysterious person with a media representative face to face. Although, it's unlikely we'll actually see his face, given the presence of his smiling assistant with a blindfold in her hand. Be that as it may, we find ourselves in a black van.

The irony is that the van is playing "No Eyes," his 2013 hit. This is exactly what gives us the opportunity to reflect on the steeply growing popularity of this producer from comparative obscurity to one of the most notable characters in the global deep house scene. Puffing and vague sounds come from the speakers - sampled by "Cream" Wu-Tang Clan or "Wrong" by Dr. Dre, or "Ghost" featuring Alec Onsworth's band Clap Your Hands Say Yeah, which only emphasize that Claptone has an almost mystical ability to make contagious and very neatly recorded house music.

It's easy to imagine him in the studio, wearing a top hat and white gloves and waving a magic wand like the conductor of a shaman orchestra, but as soon as we start to relax, the music turns off, the van stops and its door slides open. We disembark and walk through several doors, through some nooks and crannies and further down the stairs, until we are covered by the smell that usually stands in damp tunnels, after which we stop abruptly. Then there is a knock on the door and a juicy bass says: "Come in." Inside our eyes are untied. We see that we have arrived in a tiny dark brick basement, lit only by a couple of candles. One is on the table next to an empty chair. Another illuminates, but very faintly, a man sitting in a golden mask at the other end of the table. We can say that we got along with him face-to-beak. “Great fellows who went through this maze,” he says, gesturing with a white-gloved hand at an empty chair. Please sit down.

When the door closes behind us and the water pipes overhead begin to gurgle muffledly, we cannot help but ask a question related to his hidden identity: is this a game or is it serious? “Both,” he replies, and his impeccable English has a subtle German accent. - I released the first disc anonymously, because all the time before that I had been doing different music, and when I wanted to do something different from this, I tried not to associate myself with it. It was fun, but along with it I got the freedom I wanted. By the time I released Cream, I had already received several requests for DJ performances, which meant coming out of the gloom. So I became Claptone and started wearing a mask.

This anonymity as such is, of course, nothing new. From Burial to Daft Punk to Redshape, many have decided (or at least tried) to hide their true colors under a veil. However, Claptone does not consider it to be among them. “I don't see any difference between, say, Redshape and Michael Jackson, who underwent plastic surgery to create his own mask. Everyone wears masks, and as soon as they become more famous, they want to do it more and more often. If I am a part of this tradition in dance music, it is rather a more theatrical story. For example, like Devo, who always dressed up in their own costumes ”.

Given the presence of the mask, it is impossible to say how old Claptone is. Although the absence of gray hair in his black beard suggests ... "about a hundred years," - he said in previous interviews, and this may well be an exaggeration. From his DJ sets, one can feel that the most diverse music influenced him. Perhaps the question of the musical past will shed some light on this?

“A lot of artists like to differentiate between styles. And I see how people often need these pointers to help them navigate the world of music. As for me, this division is irrelevant. Whether it's Einstürzende Neubauten or the birdsong in the fields, I try to absorb everything that can inspire me. If we talk about Claptone, then this project is based on house and club music, but it also has live notes. I'm trying not to be too synthetic. I try to be human and ultimately touch other people like that. ''