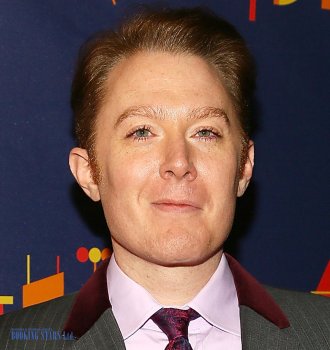 Clay Aiken was born on November 30, 1978, in Raleigh, North Carolina. He is a singer, songwriter, actor, author, and a politician. He is mostly famous for the songs “This is the Night”, “Bridge Over Troubled Water”, “The Way’, and “Solitaire”. Clay holds various awards, including five Billboard awards and two American Music awards.

Clay was interested in music since high school. He attended North Carolina University where he continued to dedicate himself to music. Aiken performed at student parties and sang the national anthem at school celebrations. After finishing school, Clay spent a lot of time traveling. He joined famous bands on their tours.

Popularity came to Aiken after he was accepted to American Idol in 2003. He came in second. The same year Aiken released his debut album Measure if a Man. The album topped Billboard 200, received two platinum certifications in the USA and one in Canada, and sold almost 3 million copies.

In 2004, Clay released his second LP Merry Christmas with Love. It was slightly less popular than the debut album, reached the 4th spot on Billboard 200, and sold about 1.5 million copies in the USA.

In 2006, recorded his third album A Thousand Different Ways, which was again less popular than the predecessors, even though it managed to reach the second spot on Billboard 200. It sold just over 500,000 copies.

In 2008, Aiken recorded his fourth LP On My Way Here. It was moderately popular in the United States and Canada but didn’t sell too many copies.

Aiken recorded two more studio albums Tried and True (2010) and Steadfast (2012). Both of them lacked the success of his previous work. Meanwhile, Aiken made his presence known on television and in the theater. He is also a big activist and a politician. Aiken gives charity concerts for various causes, including children with autism. He worked with Make a Wish Foundation and raised funds for charities that help people fight AIDS.

Fill in the application form on our website and enjoy the singer's performance!