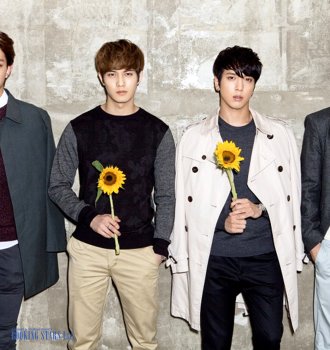 It is worth noting that unlike the majority of other South Korean bands of the 1990s and 2000s, this one was formed without the assistance or funding of any label. The musicians began their career by performing on the streets of Seoul and Tokyo. They gave their first concert near a railway station in Tokyo. The band’s first EP, Now or Never, featured songs in English but didn’t manage to make it into the charts. The second EP, Voice, recorded in Japanese and English came out at the end of 2009. It reached the 227th spot of the Japanese Oricon chart, which was a formidable achievement for a young group.

The year 2010 was more successful for the band. The artists signed a contract with FNC Entertainment, which sponsored several video teasers in South Korea. In January, the group released a new EP, Bluetory, which immediately topped the South Korea Gaon Album Chart, came in 5th on Taiwan G-Music Weekly J-POP Charts and settled on the 93rd spot of Japan Oricon Albums Chart. The EP earned platinum status in Taiwan.

The lead single of the album, “I’m a Loner”, appeared on the 2nd spot of South Korea Gaon Digital Chart. It turned into the most popular mobile ringtone of the year.

In May, CNBLUE released their second EP, Bluelove. It climbed to the 3rd spot on the South Korean chart, came in 4th in Taiwan, and made it into the Japanese chart on the 112th position. Just like the predecessor, the album turned platinum in Taiwan.

Between the EP releases, in March 2010, the group recorded their first LP. They produced the album independently so it didn’t manage to become overly successful. However, the album still reached the 90th spot of the official Japanese chart.

In 2011, the group recorded two more LPs, First Step for South Korean fans and 392 for the Japanese audience. The first one climbed to high spots of the South Korean Gaon Album Chart and sold over 134,000 copies. The second one came in 6th in Japan. The same year, the musicians released a new EP, First Step +1 Thank You, which topped South Korea Gaon Digital Chart. At that time, many fans tried to book CNBLUE for private events.

In 2012, the group recorded an EP Ear Fun and LP Code Name Blue while working with Warner Music Japan. The work with a Japanese label brought excellent results. The LP topped Japan Oricon Albums Chart and came in 33rd on South Korea Gaon Album Chart. The same year, the artists re-released their EP Voice, which they initially presented in 2009. The new version reached the 90th spot of the Japanese chart.

In 2013, the group re-released another old EP, Now or Never. It reached the 95th spot of Japan Oricon Albums Chart. The new LP What Turns You On?, which came out in August settled on the second spot of the Japanese chart. It sold 52,000 copies.

In 2014, CNBLUE released an EP Can't Stop and an LP Wave. The latter came in third on the official Japanese chart. The EP came in 15th. The former topped the South Korean chart and came in 2nd in Taiwan.

In 2016, the group released a new LP for the Japanese audience. Euphoria climbed to the 2nd spot on the chart. The EP, Blueming, which came out the same year, topped the South Korean national chart.

In October 2017, CNBLUE presented an LP Stay Gold and a ЕР 7°CN. Both became popular in Japan. The single “Shake”, featured in the LP, became a hit.

At the moment, some of the group members are mandatorily serving in the military. The group will return in 2020.