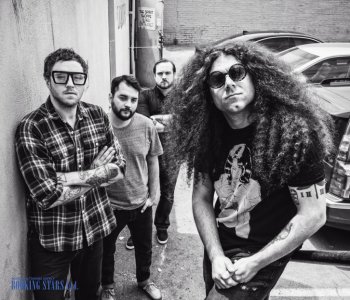 In 1996, the artists changed the name to Shabutie. Five years later, the band was renamed once again. That time it became Coheed And Cambria. The leader of the band was Claudio Sanchez. He came up with ideas for the band’s lyrics and music.

Coheed and Cambria’s music was always hard to classify. Musicians mixed several genres, such as emo, progressive rock, and metal. The first album they released in 2002 was The Second Stage Turbine Blade. It came out with the assistance of Equal Vision Records. To support the LP, the band toured the USA for an entire year. The album became the second part of a five-part saga.

In 2003, the band released a new album, In Keeping Secrets of Silent Earth: 3. It was the third part of the saga. The LP was more successful than the predecessor and reached the 52nd spot of Billboard 200. Eventually, it earned gold status. Singles, "Blood Red Summer" and "A Favor House Atlantic", appeared on MTV. After the release, the group embarked on a tour of North American with Thrice, Thursday, AFI, and Rainer Maria.

In 2004, Coheed & Cambria joined an annual touring festival Warped Tour and embarked on a tour of Europe. In 2005, they released an LP, Good Apollo, I'm Burning Star IV, Volume One: From Fear Through the Eyes of Madness, which was the fourth part of the saga and the first part of a two-volume fantastic series. The album reached the seventh spot of Billboard 200.

In 2007, the band suffered several lineup changes, which didn’t reflect on its work. The fifth part of the saga and the second volume of the previous album came out as Good Apollo, I'm Burning Star IV, Volume Two: No World for Tomorrow.

In 2010, the group released a new album, Year of the Black Rainbow, which turned out to be a prequel of the main saga, Armory Wars. At that time, many organizers tried to book Coheed and Cambria for private events.

The first part of a new two-part album series appeared in the fall of 2012. The group called it The Afterman: Ascension. The second part came out a year later as The Afterman: Descension. After the release, the band went on a break. At the end of 2014, Sanchez announced that the artists were working on a new album.

The eight LP, The Color Before the Sun, came out in 2015. It was the first album released by the band, which didn’t have any connections to The Armory Wars saga. One of the best singles featured on the album was "You Got Spirit, Kid”.

At the beginning of 2016, the musicians embarked on a big tour of the USA, together with such progressive rock artists as I the Mighty, Glassjaw, and Silver Snakes. At the end of the year, they toured the country with Polyphia and Saves the Day.

In February 2018, the band announced plans for touring with The Story So Far and Taking Back Sunday. A couple of months later, the artists signed a contract with Roadrunner Records and released a teaser for the next LP, which was planned to come out the same year. The music video for the lead single "The Dark Sentencer" collected almost two million views on YouTube.

At the beginning of 2019, Coheed and Cambria embarked on a tour with Maps & Atlases.