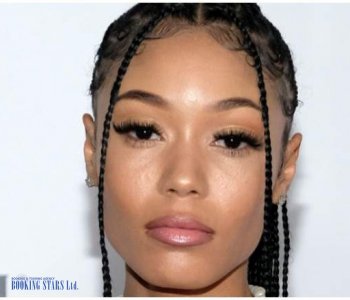 Early singles "G.A.N." and "Pac Girl" bubbled up in 2017, with both tracks landing on her debut full-length, 2018's Everythingcoz. Subsequent singles like "Huddy" (from 2019's EC2) continued to push her into the mainstream, while adding collaborations with Fetty Wap, Wifisfuneral, and Gunna to her catalog.

The hit track with the latter appeared on her 2020 EP Now or Never.

Spider-Man: Into the Spider-Verse [Soundtrack from & Inspired by the Motion Picture]Born in Boston and raised in New Jersey, a teenage Leray quit her day job to pursue music, issuing her first viral hit "G.A.N." in 2017. Follow-up "Pac Girl" fared just as well and both singles landed on her first full-length Everythingcoz, which arrived in 2018. She also joined the superstar roster for the soundtrack to Spider-Man: Into the Spider-Verse. Later that year, she expanded her audience with the well-received track "Huddy" from her second effort, 2019's EC2 (Republic Records).

That album also featured a collaboration with Trippie Redd ("Big Dawgs"); she returned the favor by appearing on his LP ! ("Everything BoZ").

Leray launched 2020 with a slew of singles, including "Better Days" with Fetty Wap and "Lost in Time" with Wifisfuneral.

A third pairing ("Slide" with Gunna) was included on her EP Now or Never, which also featured Kiana Lede and Sevyn Streeter.

She closed the year with the single "Merry Xmas."