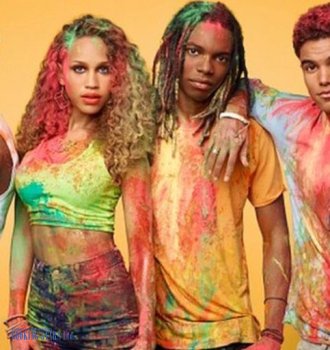 The band’s story begins in the late 2000s when Amanda meets T-Ray. Even though she was just a couple of years older, Amanda worked as T-Ray’s babysitter. The two young people decided to form a band. It became successful in 2011 when the artists started uploading music videos to YouTube. They were recording covers for popular songs.

Initially, Cover Drive signed a contract with Global Talent’s branch, Polydor Records. Immediately, the band embarked on a tour with Rihanna. They performed as an opening act at her Loud Tour. Cover Drive also filmed commercials for Barbados travel agencies.

The band’s debut single was “Lick Ya Down”. It was released in 2011. After the single appeared on the radio and TV music channels in the UK, it reached the 9th spot on the UK Singles Chart and came in third on R & B Singles Chart. The band quickly became popular. Many new fans tried to book Cover Drive for private events.

The group released its first LP in the UK in 2012. The artists called it Bajan Style. The lead single was "Lovesick Riddim". The album earned mostly positive reviews from the critics. They called Cover Drive’s songs catchy and noted Amanda’s ability to perform using different genres. Some compared her to Rihanna, who is also from Barbados. The album settled on the 14th spot of the UK Albums Chart and came in 28th in Scotland.

A year later, the group uploaded a music video for the track “All My Love” to its official YouTube channel. It was highly successful. A little later, Cover Drive appeared in one of the episodes of House Hunters International on HGTV.

Soon, the artists recorded another music video for the single “Lovesick Riddim”. The song was planned to become a part of the EP, Liming In Limbo, which came out in December 2013. The album was self-released and didn’t turn out as popular as the group hoped.

In time for the traditional harvest festival in Barbados, Crop Over, the artists recorded a new song “Dis Ain't Love”. In the summer of 2014, they uploaded a new video to their YouTube Channel and announced recording another video to the popular single “Love Junkie".

While listening to the music produced by the group, it’s easy to understand why the artists are so popular in their native Barbados and beyond. All of them are highly charismatic and demonstrate numerous talents.

One of the most popular songs recorded by the group was “Twilight”. T-Ray performed the single in Euro-pop style, which earned high scores from the fans. It was the band’s first single, which made it into the Irish chart. On British iTunes, it topped the ratings just a few hours after the release. Quiz & Larossi produced the song. It topped the UK Singles Chart for a week.

Another track, which is worth noting, is “Sparks”. It’s performed by Amanda and T-Ray, accompanied by electric guitar and piano. The single reached high spots on the charts.

When reading Cover Drive’s interviews, it becomes obvious that the artists are deeply enjoying their work. They continue recording new songs and performing live.