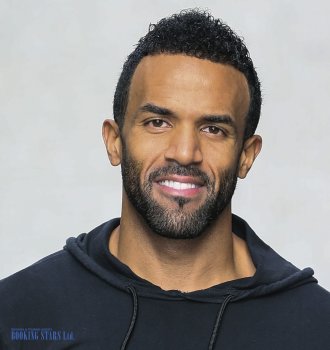 Craig Ashley David was born on 5 May 1981 in Southampton, Hampshire, England. His mom was a retail assistant while his dad worked as a carpenter. Craig has a mixed heritage. His father is African American. His mom is British. When the artist was 8 years old, his parents divorced. David’s mom brought him up alone. The singer doesn’t like talking about his high school years since he was often a bullying victim. Craig describes the experience in the song “Jonny”, recorded in 2005.

David enjoyed music since childhood. His father was part of the reggae band called Ebony Rockers. With him, teenager often visited nightclubs, where he sometimes got the chance to perform as a back vocalist.

In the late 1990’s, Craig found an opportunity to work with Damage on the song “I’m Ready”, a cover for “Wonderful Tonight”. Later, he got a job as a back vocalist when recording Artful Dodger’s single “Rewind”. The project brought David his first popularity.

While Craig was trying hard to be noticed, the managers of Wildstar Records accidently heard his song “Walking Away”. They were impressed by the artist’s voice and his deep lyrics. The company offered David a contract and he gladly agreed.

In 2000, Craig released his first LP, Born to Do It. It immediately became famous, reaching top spots of numerous charts, including the UK Albums Chart. The album also appeared on the 11th spot of Billboard 200. It featured such popular tracks as "Fill Me In", "Rendezvous", "7 Days", and "Walking Away”. The LP earned international recognition, getting numerous platinum certifications in many countries. After the release, many organizers tried to book Craig David for private events. He rarely agreed due to being very busy working on new songs.

Two years later, the artist released his second LP, Slicker Than Your Average. It reached the 4th spot of UK Albums Chart and settled on the 32nd place of Billboard 200. The album earned platinum statuses in the UK and Australia. It featured such hit singles as “What’s Your Flava”, “Rise & Fall” (with Sting), and “Spanish”.

In 2005, Craig presented his third LP, which he called The Story Goes...It came in 5th on the UK Albums Chart. The LP also appeared on many European charts but didn’t make it into Billboard 200. The singles "All the Way", "Unbelievable", and "Don't Love You No More (I'm Sorry)" became international hits and climbed to high spots of European charts.

In 2007, David recorded his next album, Trust Me. The album’s guests were Martin Terefe and Fraser T Smith. The LP climbed to the 8th spot of UK R&B Albums Chart and settled on the 18th position of the UK Albums Chart. The album was also popular in the USA, reaching the 58th spot on Top R&B/Hip-Hop Albums Chart.

The official release of Signed Sealed Delivered occurred in 2010. The album earned different reviews from the critics, from impressively positive to surprisingly negative. The LP climbed to the 2nd spot of UK R&B Albums Chart and came in 13th on the UK Albums Chart. The fans appreciated such singles as "One More Lie (Standing in the Shadows)", "All Alone Tonight (Stop, Look, Listen)", "Just My Imagination", and "For Once in My Life".

The artist announced his new LP in 2011. However, a tight concert schedule coupled with the work on founding David’s own label delayed the release until 2016. Following My Intuition topped UK Albums and UK Dance Albums Charts. It earned a gold status in the UK.

In January 2018, the musician presented one more LP, The Time Is Now, which climbed to the 2nd spot on the UK Albums Chart. Craig spent the first half of 2018 touring the world to promote the LP.

Throughout his career, David earned 42 nominations for different awards. He holds 12 prestigious awards, among which are two MTV Europe Music Awards and five MOBO Awards.