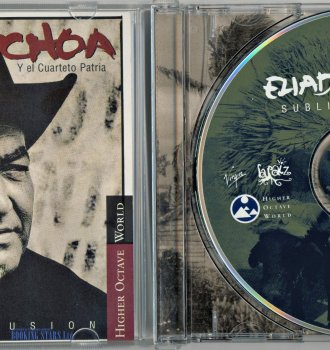 Cuarteto Patria was formed in Santiago de Cuba in 1939. From the very beginning, the band focused on the music of famous Cuban artists, such as Miguel Matamoros and Los Compadres. The band played several instruments, including, maracas, contrabass, and guitar.Initially, the group performed at festivals and private parties. They also offered a serenade service and gave improvised live concerts in bars and on the streets. Cuarteto Patria made such concerts popular in Cuba. Soon other groups followed suit.

In 1960, one of the co-founders of the band, Emilia Gracia, died but the group continued working with a shortened lineup.

In the 1970’s, new musicians joined Cuarteto Patria. One of them was Hilario Cuadras, who played maracas. Cuadras had a strong and beautiful voice so he became a leading vocalist of the band.

In 1978, the band’s director Francisco Cobas decided to leave the group and asked Eliades Ochoa to replace him. Since 1979 and until today, Ochoa works as the band’s director. He honored Cobas’ wish to maintain the band’s elegant sound while interpreting traditional Cuban genres, such as sones. Guarachas, bolero, and others.

Ochoa slightly changed the original layout by adding percussions, guitar, bongo, acoustic contrabass, and a few other instruments. He helped the band find a new sound.

In 1979, the band was named Best Group of Cuban Traditional Music. The same year Cuarteto Patria was invited to perform in Havana. A year later, the band played its music at the Varadero International Festival and recorded its first studio album Harina de maíz criolla. Back then, the band worked with Siboney Studies, which was based in Santiago de Cuba. After the release of the LP, the band went on its first world tour. The group’s songs were very popular. It wasn’t as easy to book Cuarteto Patria as it used to be 10 years ago.

In 1987, Ochao got a chance to work with a famous musician Francisco Repilado, known under the pseudonym Compay Segundo. The band sang some of the musician’s songs. He also joined the band at several concerts. Ochoa and Repilado became friends. The former helped the latter come back to the world of Cuban music.

In 1989, Compay Segundo and Cuarteto Patria participated in a music festival, which took place in Smithsonian Folkways in Washington D.C.

In 2001, the band received an SGAE (Spanish Author, Editor, and Musician Society) award for the Best traditional music album

In 2010, Cuarteto Patria and Malian Musicians recorded an album, AfroCubism. Two years later, it was nominated for a Grammy award.