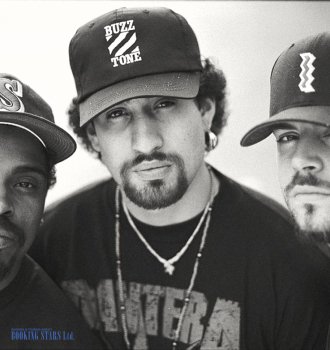 Cypress Hill was formed in California in 1988. Initially, the musicians performed Latin rap but then switched to other rap styles. The founders were Senen Reyes (known as Sen Dog) and Ulpiano Sergio Reyes (performing under a pseudonym Mellow Man Ace).

In 1971, both musicians emigrated from Cuba to the United States. They settled in California and met Lawrence Muggerud (known as DJ Muggs, who performed with the band 7A3) and Louis Freese (aka B-Real). The four artists decided to form a band, which they called DVX. DVX stood for Devastating Vocal Excellence. In 1989, Mellow Man Ace left the group in order to pursue a solo career, which turned out to be fairly successful. After his departure, the artists changed the name to Cypress Hill (after a street in their town) and began working on a debut album. Later, in 1994, Eric Bobo joined the band.

In 1991, the group presented its first album, Cypress Hill. The LP earned high scores from the public and the critics. It climbed to the 4th spot of Top R&B/Hip Hop Albums Chart, settled on the 5th position of Top Heatseekers Chart, and came in 31st on Billboard 200. It was an impressive success for the debut album. Such songs as "Hand On The Pump", "The Phuncky Feel One”, “How I Could Just Kill A Man", and "Latin Lingo" reached high spots on the charts.

In 1993, the artists released another LP, Black Sunday. The album reached the tops of Billboard 200 and Top R&B/Hip Hop Albums Charts. More than 260 000 copies were sold in the first week after the release. The popular singles included "I Ain't Goin' Out Like That", "When the Shit Goes Down", "Lick a Shot", and "Insane in the Brain". The latter earned a gold status in the USA.

In 1994, the single “Insane In The Brain” brought the band several Grammy Award nominations, including Best Rap Performance by a Group or Duo and an MTV Video Music Awards nomination for Best Rap Video. At that time, many organizers tried to book Cypress Hill for private events.

In 1995, the artists presented a new LP, Cypress Hill III: Temples of Boom. It reached the 3rd position on Billboard 200 and Top R&B/Hip Hop Albums Chart and became platinum in the USA. Just as the previous albums, this one appeared on many European charts. The same year, the single "I Ain't Goin' Out Like That" brought the group a Grammy nomination for Best Rap Performance by a Group or Duo. A year later, "Throw Your Set in the Air" was nominated for the same category.

In 1998, the group released the next LP, Cypress Hill IV. It reached the 11th position on Billboard 200 and earned several gold statuses in different countries.

In 2000, Cypress Hill recorded Skull & Bones. The LP featured such popular singles as "(Rap) Superstar”, “(Rock) Superstar", "Highlife”, and “Can't Get the Best of Me". The LP climbed to the 5th spot of Billboard 200 and earned a platinum status from RIAA.

In 2001, the artists presented another LP, Stoned Raiders. It turned out to be less successful than their previous work. However, the album still reached satisfactory spots on the charts and earned great reviews from the music critics.

In 2004, Cypress Hill recorded Till Death Do Us Part. The LP reached the 21st spot of Billboard 200 and settled on the 23rd position of Top R&B/Hip-Hop Albums Chart.

In 2010, after a long break filled with tours and concerts, the band came up with another LP, Rise Up, which featured such popular songs as "Get 'Em Up", "It Ain't Nothin'", "Rise Up", and "Armada Latina". It reached the 19th spot of Billboard 200.

It took the group another eight years to come up with a new LP. Between 2010 and 2018, the musicians were giving many concerts. In 2018, they finally released Elephants on Acid. Even though it didn't reach high spots on the charts, the LP was welcomed by the fans and the critics.