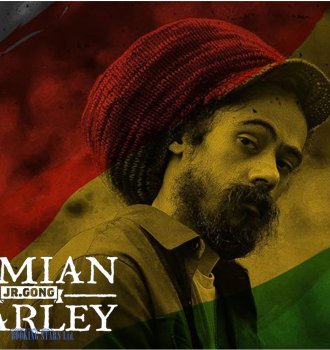 Damian Marley’s full name is Damian Robert Nesta Marley. He was born on 21 July 1978 in Kingston, Jamaica. His nickname Jr. Gong shows his relationship to the legendary reggae musician Bob Marley, who was his father. Bob died when Damian was just two years old. The singer was brought up by his mother, Cindy Breakspeare, who was titled Miss World in 1976.

Damian’s road to fame began when he was just 13 years old. He formed his own band Shepherds, which in 1992, performed at Reggae Sunsplash Festival. Besides Marley, the lineup included Freddie McGregor and Cat Core. However, the group didn’t stay together long. It fell apart in the 1990’s.

The same position awaited the second LP by Damian, Halfway Tree. He recorded it in 2001 with the label Universal Motown. The album featured such hits as "Educated Fools", "More Justice", "She Needs My Love", "It Was Written", and ”Still Searchin'". The guests were Bounty Killer, Treach, Stephen Marley, Eve, Capleton, Drag-On, Mr. Cheeks, Jimmy Cozier, Yami Bolo, Daddigan, Sabor and many other artists. In 2002, this LP brought Damian Marley a Grammy Award for Best Reggae Album. At that time, many organizers tried to book Damian Marley to perform at their private events.

After the release of the third LP, Marley started collaborating with other artists more often than before. In 2007, he worked on the song “Now That You Got It” with Gwen Stefani, which later became a part of her album, The Sweet Escape. It was a formidable achievement for the artist.

Between 2010 and 2011, the musician collaborated with Nas to record an album, Distant Relatives. He worked on two tracks, "As We Enter" and "Nah Mean". The first one appeared on the 16th spot of Billboard’s Reggae Albums Chart and made it to the 116th position of Billboard Hot 100.

In 2012, together with Skrillex, Damian Marley recorded “Make It Bun Dem”. Then with Cypress Hill and Rusko, he presented “Can’t Keep Me Down”, which became part of the album, Cypress X Rusko. Marley also worked with Sean Paul to record “Riot” for his 2013 album, Full Frequency.

In 2016 and 2017, the artist collaborated with Stephen Marley and Ty Dolla Sign. Together they created "Medication" и "So Am I". A little later, Damian worked with Jay-Z on his song “Bam”.

In 2017, after a long break, Marley finally released his fourth LP, which he called Stony Hill. The album reached the 65th spot of Billboard 200 and topped Billboard’s Reggae Albums Chart. It also became popular in the UK, Switzerland, and France. The album brought Damian Marley a Grammy Award as Best Reggae Album.