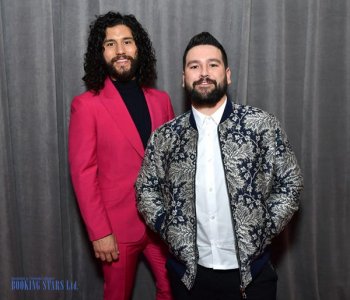 Dan + Shay is an American country duo named after its members, vocalists and songwriters, Dan Smyers and Sheya Mooney.

Dan Smyers was born on August 16, 1987 and raised in Wexford, PA. Pennsylvania. There he graduated from college and entered Carnegie University, where he studied finance.

Mooney and Smyers met in Nashville, Tennessee on December 7, 2012. Mooney came to work in Nashville studios as a solo artist for Nappy Boy Entertainment, while Smyers was here as a member of the Bonaventure group. Prior to that, he played with Transition on Floodgate Records.

The very next day after meeting, the musicians began to compose songs in a duet. Within two months the duo had a decent program. They signed to Warner / Chappell Music.

On October 14, 2013, the duo released their debut single "19 You + Me", which was well received. The debut album "Where It All Began" ("Where it all begins") was released on April 1, 2014. He quickly topped the hit parade of country music and became "gold", and the duet at the end of 2014 received an award from the Academy of Country Music in the category "Best vocal duo of the year."

Further 4 singles of the duo occupied the first line of the country charts: "Nothin 'Like You", "From the Ground Up", "How Not To" and "Tequila", having received "gold" or "platinum" certification.

In January 2018, the duo released the single "Tequila", which announced their third studio album. It was named Dan + Shay and was released on June 22, 2018. The album climbed to number 40 on the Billboard National Chart.

The album includes the track "Keeping Score", co-recorded with Kelly Clarkson. The duo also recorded "Those Days" with violinist and dancer Lindsey Sterling, which was featured on her third album, "Brave Enough", which was released on August 19, 2016.

In October 2019, the Dan + Shay duo recorded the song "10,000 Hours" with Justin Bieber. The song was written for Bieber's wedding to model Hailey Baldwin as a wedding gift. Bieber made a trio with the musicians, while the newlyweds took part in the filming of the video, which brought him immense popularity.