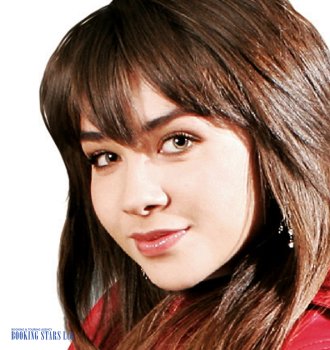 Daniela Lujan was born on 5 April 1988 in Mexico City. Since childhood, she was a big fan of music. When Daniela was just five years old she participated in the show Plaza Sésamo (the Mexican version of Sesame Street). Two years later, the girl landed a leading role in the telenovela Luz Clarita. She recorded a soundtrack for the series as well. This role pushed Daniela’s acting and singing career forward. She started getting offers from a variety of soap operas.

In 1998, Lujan got a leading role in the soap opera El Diario de Daniela, where she portrayed Daniela. The series ran on the Mexican TV for two years. Right after the series was over, Lujan performed at a theater play Caperucita Roja (The Little Red Riding Hood), where she portrayed the main character.

While filming TV series, the young woman wasn’t forgetting her wish to become a singer. In 1999, she released her debut studio album Por Un Mundo Mejor. A year later, Daniela recorded her second album Cor@zón.com. Both albums were rather successful in Mexico and several singles made their way to the radio stations. This album is considered to be the artist’s transition from a child star to a mature artist.

In 2002, Lujan worked as a host of a program for children Alebrije Kids. The same year she played Silvana and Mariana (double role) in the TV series Cómplices. She literally saved the producer by coming to the series because the previous star suddenly left the show due to problems with administration. Lujan recorded a soundtrack to the film Cómplices al Rescate and went on a tour. The disc was extremely popular all over Mexico.

In 2005, Lujan got into a car accident and had to stop performing for a while due to surgery and rehabilitation. But in 2006, she was back in full force. Daniela was invited to be a host of a kid’s show Kids 4 Tv. She also landed a good role in the musical Vaselina (the Mexican version of the famous American musical Grease). The show was very popular in Mexico.

In 2008, Daniela got a leading role in the play Cinderella.

In 2009, she released another studio album Tanta Mujer. The artist did her best to promote the LP. She traveled all over Mexico and participated in various music festivals.

In 2010, Lujan portrayed Nessarose (The Wicked Witch of The East) in the musical Wicked. This popular musical describes the lives of the witches from Oz.

In 2011, Daniela participated in the reality show Amigos y Rivales (Friends and Enemies), which she won.

Even though Lujan is focusing on her acting career, she never forgets about music. Daniela is planning to record at least one more studio album in the nearest future.