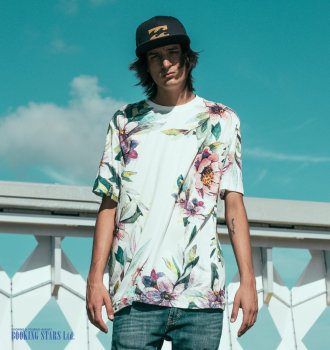 Danny Ocean is a singer from Venezuela, who was born on 5 May 1992 in Caracas. His real name is Daniel Morales. The artist began his career as a professional singer in 2009 by creating a YouTube account and uploading his songs there. In several years, he became famous all over the world.

Danny was a big fan of music since childhood mostly because his father was a musician. Morales enjoyed mostly electronic genres. He inherited his father’s talent. Danny’s parents supported his hobby and sent him to music school. The artist enjoyed experimenting with music. When he was in college, he started creating rap songs with his friends. The experience helped Danny when he decided to pursue a music career.

In 2009, Morales adopted the pseudonym, Danny O.C.T. and began recording music professionally. The single “Backstage”, which he presented in 2012, appeared in the album, Desolat X-Sampler Purple, released by labels Desolat and Forced Exposure 20.

In 2014 and 2015, the artist recorded two EPs. He called them Parachutes and U-YE. Both albums became successful in Venezuela. Music wasn’t Danny’s only hobby. He was a political activist, who participated in protests on the streets of Caracas. When he was 23 years old, Morales decided to look for better opportunities and moved to Miami. He had to work at a low-paying job to support his hobby as a musician.

The artists’ efforts paid off. In 2016, he released a single “Me Rehuso”. The singer said that the lyrics were inspired by the young woman he had to leave in Venezuela. The song became popular and soon turned into a huge hit, which played in clubs and radio stations. Today, the number of views of the music video on YouTube exceeds one billion and hundreds million on Spotify.

For the fans in the United States, the singer recorded an English version of the song. In 2017, he signed contracts with Atlantic Records and Warner Music Latina. It opened up new horizons for the artist, who took the opportunity to record such hits as “Dembow”, “Vuelve”, and “Veneno”.

In the spring of 2016, “Me Rehuso” came out officially. A year later, the label rereleased it. The number of views of the music video started growing with the speed of light. The single became platinum. At that time, many fans tried to book Danny Ocean for private events.

In 2017, the young artist was nominated for Revelation Artist of Premios Juventud. After that, he became especially popular in Columbia. The number of views of the “Me Rehuso” music video on YouTube exceeded 160 million by the middle of the year. Its English version, "Baby I Won't", collected over 25 million views on YouTube.

The same year, the talented artist was nominated for Kids Choice Awards Mexico and 2017 MTV Millennial Awards. Even though the artist didn’t earn the awards, the nominations helped him become sure of himself and continue developing his skills. Danny worked hard on his debut album, which came out with the assistance of Atlantic Records.

The debut LP appeared in March 2019. The singer called it 54+1. The first number was part of Morales’ address in Venezuela. The second number signified an additional track. The singer released one track a day for his upcoming album, starting with “Cuando me acerco a ti” and ending with “Veneno”.

Danny doesn’t share too many details about his childhood, family, and personal life. However, fans are always happy to hear even the smallest pieces of information. In his interviews, Danny gives short replies to questions about personal life and talks mostly about his music and upcoming projects.

The musician notes that songs take him a different amount of time to record. Sometimes, he can write a hit in under an hour. At other times, it takes him several days to finish a song. Danny works mostly in his home studio.

Ocean continues releasing new songs, which his fans follow on the artist’s YouTube channel. He also collaborates with other musicians. The latest single “Lookin' For” was recorded together with a successful DJ and producer, Digital Farm Animals.