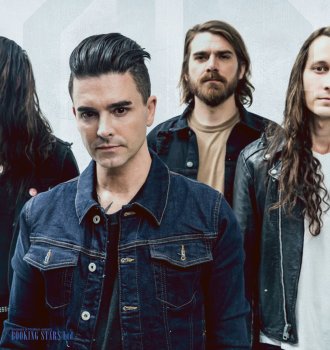 Dashboard Confessional was initially a solo project created by Chris Carrabba in 2000. The name came from the song "The Sharp Hint of New Tears", which was part of the band’s first LP, The Swiss Army Romance. The album came out in March 2000 under the label Fiddler Records. Only a thousand copies were released. In November, it was re-released under Drive-Thru Records.

At the same time, Chris was working with another band. Together with Further Seems Forever, he recorded an LP, The Moon Is Down, which came out in 2001. After the release, Carrabba left the band and devoted all of his time to Dashboard Confessional.

The group’s second LP, The Places You Have Come to Fear the Most, came out in March 2001. It earned high scores from the critics and reached the 108th spot on Billboard 200. The album earned a gold certification for selling over 500,000 copies in the USA. The same year, Dashboard Confessional released two EPs, The Drowning EP and So Impossible EP. The latter got better reviews from the critics.

In 2002, Chris was joined by three more musicians, and together they went on a tour.

In 2003, Vagrant Records re-released The Swiss Army Romance once again. This time it entered Top Heatseekers chart and settled on the 39th position there. The LP made it into Rock Sound’s 101 Modern Classics list. However, it only reached the 100th position.

In August 2003, the band released its 3rd studio LP, A Mark, a Mission, a Brand, a Scar, which became a real hit. It debuted on the 2nd spot of Billboard Hot 100 and sold over 122,000 copies during the first week of sales. The LP topped Independent Albums Chart and earned a gold certification from RIAA. Many fans wanted to book Dashboard Confessional for their events.

In 2004, Dashboard Confessional recorded a song “Bidicated”, which became the soundtrack for the movie Spider-Man 2. It brought the band even more popularity. The song was a hit in the USA, Australia, and New Zealand.

In 2005, the group came back to the studio to work on a new album. The lead single “Don’t Wait” appeared in May 2006. It reached the 80th spot of Billboard Hot 100. A month later, the new LP, Dusk and Summer, was released. Just like the previous LP, this one reached the 2nd spot on Billboard Hot 100. It also topped US Top Rock Albums. The album became popular in Canada, Germany, the UK, and Australia. RIAA gave it a gold status.

In 2007, the band recorded an acoustic album, The Shade of Poison Trees. It settled on the 18th spot on Billboard 200 and topped Independent Albums Chart. It also entered the UK and Australian charts.

Dashboard Confession spent the next year working on the sixth album. In November 2009, they presented, Alter the Ending, which came out under the Interscope label. It debuted on the 19th spot of Billboard 200.

After a long hiatus (2011 – 2015), the band reunited to record a new album. At the beginning of 2017, Dashboard Confessional released an EP, Covered and Taped, which consisted of four covers of their earlier songs. In October, Chris announced a new LP, which came on in February 2018. Shadows reached the 53rd position of Billboard 200.