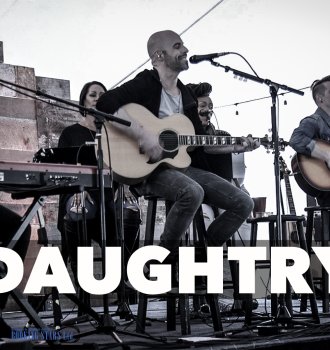 In 2006, the winner of the music contest American Idol, Chris Daughtry, decided to form his own band. After several grueling auditions, he ended up inviting four members: Jeremy Brady, Josh Steely, Josh Paul, and Joey Barnes. A decision was made to call the band in honor of the founder in order to capitalize on the popularity he earned at the show.In the end of 2006, the band recorded the first studio album Daughtry, produced by a well-known producer Howard Benson. The group signed a contract with RCA records. Almost all the songs for the LP were written by Chris.

The debut album was immediately successful. It topped Billboard 200 and sold over 7 million copies worldwide. The leading single "It's Not Over" reached the 4th spot on Billboard Hot 100. Soon, Jeremy Brady made a decision to leave the group and was replaced by Brian Craddock. The second single from the LP “Home” made it to the 5th spot of Billboard Hot 100. The song was featured in the six season of American Idol and made it into the similar shows in Australia and Brazil.

The third single "What I Want", was a 2007 radio hit and reached the 6th spot on US Mainstream Rock Tracks. All six singles from the LP were very successful. The album itself earned four platinum certificates by April 2008.

The band was nominated for a Grammy Award in 2008 in four categories but didn’t win any prizes. However, in 2007, it earned six Billboard Music Awards and three American Music Awards. Two more they received in 2008.

In March 2009, Daughtry wrote on the band’s official website that the second album is ready to be released. Four months later, Leave This Town came out. It featured 14 new songs. The album topped Billboard 200 and sold almost 270,000 copies just a week after the release.

In 2010, the band suffered another lineup change. Joey Barnes left the band. He was replaced by Robin Diaz. The same year, the group released an EP Leave This Town: The B-Sides. It contained bonus tracks from the previous LP.

In 2012, the band reported another lineup change. Josh Paul decided to leave the band. He said that it was a tough decision and called the band members his brothers.

In 2013, Chris wrote on Twitter that the band started working on their fourth album without Josh. Surprisingly enough, Josh came back to the band in May.

In October 2013, the band released a promotional single "Long Live Rock and Roll", which appeared on iTunes. The LP Baptized came out in November.

In 2016, the group released a compilation album It's Not Over...The Hits So Far, which included singles from studio albums and two new songs.

Right now, the band is working on their fifth album. However, the rumor has it that the group is going through a creative crisis. The release is planned for 2018.

How much does it cost to book Daughtry:
Price inquiry
Daughtry booking agent:
Contact agent
Daughtry Contacts:
Send Daughtry a message
« previous next »