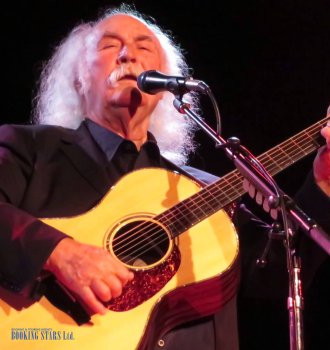 David Crosby was born on August 14, 1941, in Los Angeles. He is a singer and a songwriter. Crosby is mostly famous for such hits as “Wasted on the Way”, “Mr. Tambourine Man”, and “Turn! Turn! Turn!”. He is known for forming such bands as The Byrds and Crosby, Stills, Nash & Young.

David Crosby (David Van Cortlandt Crosby) started singing and playing guitar with his friends when he was just a teenager. He performed at local cafés and clubs. In the beginning of 1960’s David started pursuing a music career. He was moving from one city to another, looking for a job until he met a folk singer Roger McGuinn. Together they experimented with various music styles and tried to get their own unique sound by mixing folk and bass guitar.

In 1964, Crosby and McGuinn formed their first band The Byrds. In 1965, The Byrds released their first single, a remake of Bob Dylan’s “Mr. Tambourine Man”. The single was a huge success. It topped various charts and conquered Billboard Hot 100 for 13 weeks. The next two singles “All I Really Want to Do” and “Turn! Turn! Turn!”. were just as successful. Their unique style was called folk rock. In just four years, The Byrds became extremely popular. Since Crosby played a big role in the band, he often tried to manage the group. Eventually, in 1968, he left the band due to an argument.

In 1970, he formed another group Crosby, Stills, Nash & Young. The same year the group released their debut album Déjà vu, which received a golden status in less than a week. Regardless of their success, the band members decided to go their separate ways.

In the 1970’s and 1980’s Crosby sometimes went back to his first band and released several albums with them, such as American Dream (1988). In 1970’s Crosby also performed together with Graham Nash as a duo called “Crosby &Nash’. Together they recorded four albums, all of which got impressive spots on Billboard 200.

In 1980’s Crosby struggled with drug addiction. He had to go through an 11-month recovery. After that, David continued to pursue his music career. In 2004, he again was arrested for drug possession and criminal possession of a weapon. He suffers from a variety of medical problems, including heart and liver conditions. Crosby continues to perform live.