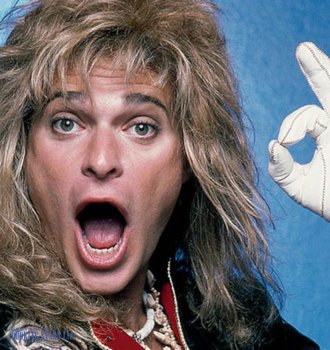 David Lee Roth was born on October 1954, in Indiana, USA. He is singer, songwriter, author, and actor. Roth is mostly famous for such hits as “California Girls”, “Just a Gigolo”, and “Just Like Paradise”. He also performed many hit songs with the band Van Halen.

When Roth was a teenager, he moved from Indiana to Pasadena, where he finished high school. At a city college, he met the Van Halen brothers. Roth didn’t graduate college and went on to work in a hospital.

In the early 1970’s, Roth tried to audition for Van Halen but wasn’t accepted. He rented the band his music equipment. After a while, the brothers decide to cut the renting costs and allowed Roth to join them as a vocalist. At first, they called themselves Mammoth but then it turned out that a band with similar name already existed, and David convinced them to switch to Van Halen.

In 1978, the band released their first album Van Halen, which was a bit hit. Right after the LP was released, David became a celebrity, well known to the public for his unique behavior on the stage. Even though more attention was paid to his manners than to the way he sang, David’s voice was an integral part of the Van Halen sound.

From 1979 until 1984, Van Halen released five more albums. Most of them were big hits. In 1983, they received such a big paycheck for one of their concerts that the group was included into Guinness Book of World Records.

In the beginning of 1985, while still working with Van Halen, David released a successful solo EP Crazy from the Heat. The EP went platinum. Such singles as “California Girls” and “Just a Gigolo” climbed to high spots on the charts. In April, David left Van Halen

Roth released 6 solo studio albums, most of which were successful.

In 1996, joined Van Halen for a short time and wrote several songs for the album Van Halen Best Of…

In 2004, Roth landed a role of a poker player in one of the episodes of a popular HBO series The Sopranos.

In 2006, he created his own radio show David Lee Roth.

In 2012, Roth established The Roth Show on iTunes and YouTube. The same year he moved to Japan. Roth continues to work on his music career.
Book David Lee Roth