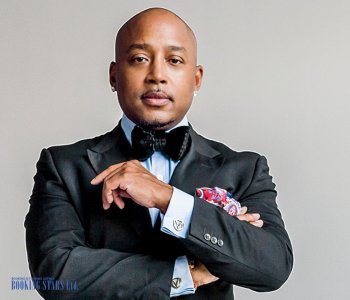 Hip-hop fashion designer Daymond John, founder and CEO of clothing label FUBU, was born in Brooklyn, New York, of Caribbean parents. Growing up in Queens, New York, John's entrepreneurial talents were exhibited at an early age; he sold everything from pencils to reconditioned cars.

Upon graduating from high school, John worked as a waiter at Red Lobster before getting his start in the clothing industry. In 1992, from his mother's basement in Queens, John began making hats to sell at concerts and neighborhood festivals. Encouraged by his early success, John recruited his childhood friends, Alexander Martin, Carl Brown, and Keith Perrin, to work with him; they began sewing tie-top hats. John set up shop at his mother's house, taking out a $100,000 mortgage. This was the beginning of FUBU, an acronym for For Us, By Us. FUBU's collection later expanded to include hockey jerseys, t-shirts, and baseball caps, all embroidered with the FUBU label.

In 1997, John created the FUBU Foundation, which raised $1 million annually. Building on the success of FUBU The Collection, John expanded his business empire with the launch in 2000 of FUBU Entertainment. FUBU sportswear also gained a sizable following of professional athletes. It was FUBU Sportswear that sponsored Nienhouse Motorsports for the 1999 Indianapolis 500. In 2002, FUBU began outfitting the Harlem Globetrotters. John also launched y2g.com as a Web portal to target the untapped market of African Americans on the Internet.