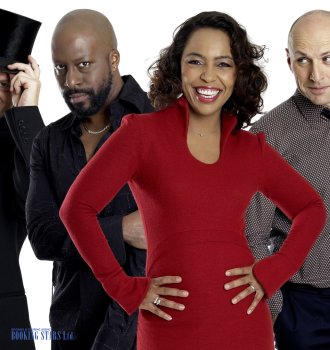 This popular German group was founded in 1997 by a German producer Pit Baumgartner, who used to work on advertisement projects. He invited various artists for each new album, however, some stayed the same. The name De-Phazz stands for Destination Phuture of Jazz. The group is famous for its mix of different styles. They perform Latin, soul, trip hop, lounge music, and more. The group combines various styles together and incorporates them unto each other. Pit invited many local German musicians to participate in this project. They all had their own fresh ideas that kept the group going.

In 1997, De-Phazz recorded their debut album Detunized Gravity. The group offered the listeners a unique combination of such styles as jungle, hip-hop, soul, and rhythm & blues. Two years later, they released the second album Gotsdog. The group slightly changed the style by getting closer to acid jazz. They were becoming more and more popular. In 2001, De-Phazz recorded their fourth album Death by Chocolate at the Universal. Shortly they appeared on MTV and started going on tours.

In 2002, De-Phazz released two albums, Daily Lama and Plastic Love Memory. In 2005, the musicians recorded the new album Natural Fake. Two years later, they released Days of Twang. In 2008, De-Phazz released the first collection of their best hits called Big. In 2010, the group recorded and released LaLa 2.0. They went on to record 5 more albums (Audio Elastique, Naïve, The Uppercut Collection, Private, and Bride) and keep working on recording new hits.

Right now De-Phazz has a reputation of a lounge style group. Before becoming a “lounge team”, De-Phazz spent plenty of time checking out various music genres. When listening to their old albums, the fans can enjoy reggae, pop, trip hop, and many more styles. A couple of times they even tried classical music.