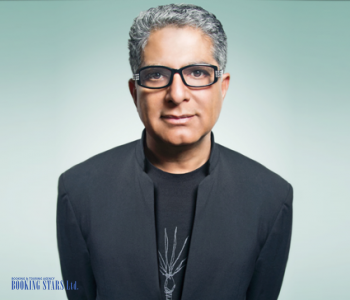 Deepak Chopra (October 22, 1946) Ayurvedic medicine doctor, motivational speaker, writer, internist and lecturer specializing in the area of ​​quantum mysticism. He was born in New Dheli, India. Currently lives in La Jolla, California, United States. Chopra was a student from a family that managed to assure him an acceptable education, knowing that in his city and in general in India the situation of poverty, inequality, and illiteracy is great.

So, after graduating with good grades, he began studying medicine at the public university in his city. When finishing his study he decided to look for better horizons outside his country. So, he traveled to the United States, at first it was not easy to get a job, although he spoke English, the culture shock was hard. But after a few months, he got a job and was promoted in a short time. He became director of the New England Memorial Hospital and was also a professor at Boston University. Stress and long working hours led him little by little to go to the cigarette and drink.

Chopra had to live a great battle against these addictions that were affecting his personal, emotional, physical and work life. Therefore, he began to return to the foundations of natural medicine learned in his homeland. Improvements began to emerge in his life. So he felt the need to divulge the principles of spiritual health, in which the mind plays a fundamental role. However, Chopra’s ideas have been controversial. He has been accused of a charlatan for not having proof of the effectiveness of his methods.

He has also been accused by some people who have taken workshops at his Chopra Center in La Jolla, California for fraud because they say they did not feel any change after this. But, undoubtedly, this center is very popular and constantly hosts an impressive number of patients from various parts of the world. Sometime later, new comments were raised against him, he was accused of plagiarism in several books, selling prescription drugs and even being seen in brothels. Actually, it was mostly a smear campaign.

But the accusations did not matter to Chopra and his readers. His followers have defended him staunchly because they feel in him a guide, protection and a wise word at the right time. His books have also managed to be sold in various parts of the world and each and everyone is qualified as successful. The best sellers lately have been: Bodies without age, minds without time, Quantum healing, The seven spiritual laws of success, Twin Souls and Sincrodestino, one of the best sellers in Colombia. In his new book, he explains that coincidences have a great power to change the course of life. Chopra ensures that the destination can be determined to achieve what is desired. In other words, coincidences are messages that come to us to route us better in life. In his book, he gives readers several tips on how to take advantage of coincidences in each one’s life. For this Indian doctor, destiny is the progressive realization of one’s goals. Chopra speaks to his followers of the need to connect with the creativity of the Universe, his ability to have compassion, achieve the purposes and love in life.

Now, for Chopra and his approaches meditation is the key and the way to find the answer to many things. Listening to your inner voice and acting according to it is one of the great tasks. At the moment in which a person’s mind achieved this, it is escaping from various emotional problems such as depression, despair, lack of meaning, among others. One of the methods by which Chopra is recognized is by his use of confrontation, in his texts and talks he is always asking questions, which undoubtedly place the person in a complicated position.

One of his most outstanding books is Golf, in this book he clarifies how important it is to understand the spirit of this game since to execute it and obtain the desired objective you must use the coordination of the body and mind. Chopra accepted an interview by the Colombian newspaper El Tiempo, where he gave a vision based on his experience and knowledge of the Colombian situation. He said it was necessary that every citizen find happiness to improve so many problems. Finding that way will guarantee success.

Chopra is one of the Indians with the most published books, he has almost 40 and they are all successful, a great number have been Best Sellers. He is one of the most outstanding characters in topics of spirituality and the power of the mind in medical healing. His influence is marked by the teachings of traditional Indian scriptures such as Ayurveda, the traditional current of Hindu healing, the Vedān ta and the Bhagavad Gita. This is expressed in each of his interviews, we also know that he is a follower of Jiddu Krishnamurti.

Time magazine chose him among the 100 icons and heroes of the 20th century and was baptized as the prophet-poet of alternative medicine. Many of his books are translated into 35 languages; in English, more than 12 million copies have been sold.