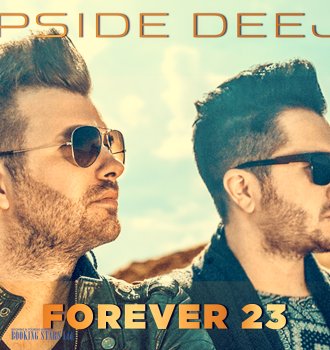 Deepside Deejays is a band from Romania, which was established in 2008. The current lineup includes Victor de la Pena and Dave Pryce. They are mostly famous for their songs “Beautiful Days”, “In My Heart”, and “Stay With Me Tonight”.

Deepside Deejays focus their attention on club/house, electro and popcorn genre. Their main goal was to create something new to stand out among the various house projects of the first 21st century’s decade. They were one of the first bands on the Romanian music scene to come up with something special. Deepside Deejays introduced a new music genre, popcorn.

The initial Deepside Deejays lineup included MC Vibearena, who left the project in 2014. The band was writing and producing their own songs. As of today, they recorded over 60 remixes and over 25 original singles.

In 2008, the band released their first single “Beautiful Days”. It was very popular in their native Romania, Russia and all over Europe. The song received some popularity in such countries as India, Morocco, and Egypt. It topped Romanian, Greek, Cyprus, Indian, and Polish charts.

In 2009, Deepside Deejays won a remix competition arranged by Toolroom South label. They presented a remix to a Dirty South single. They won another competition after recording a remix of “Get Shaky”, which was created by a famous musician Ian Carey. They also received an award for participating in Everywhere Remix Competition.

In 2011, they recorded their hit single “Never Be Alone”, which gained a lot of popularity in Europe and Russia.

In 2014, Deepside Deejays recorded three singles “Wild Child”, “In My Heart”, and “Highways”. All of them were very successful in Romania and other countries. The band continues to record new songs and create remixes.

You can book a celebrity right now! Fill in the application form online and enjoy the performance of your favorite band!