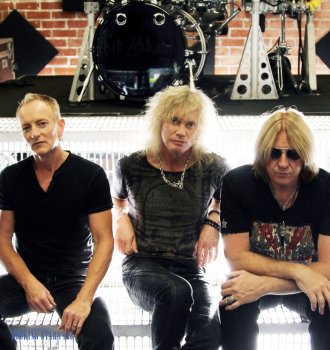 The rock group Def Leppard was established in England in 1977. The lineup changed several times. The latest one includes Rick Allen, Phil Collen, Rick Savage, and Vivian Campbell. The group is mostly famous for such hits as “Love Bites”, “Animal”, “Let’s Get Rocked”, and “When Love & Hate Collide”.

The initial lineup of Def Leppard included Joe Elliot, Rick Savage, Pete Willis, and Tony Kenning. In 1978, Kenning was replaced by Rick Allen. The musicians started playing in a small room at a local factory since they didn’t have enough money for better facilities.

In 1980, the band released their debut album On Through The Night. It was certified platinum in the USA and Canada. The LP reached the 15th spot on the UK Albums Chart and the 51st spot on Billboard 200. Their next album High And Dry (1981) was even a bigger success.

From 1983 until 1989, the group released two albums, Pyromania (1983) and Hysteria (1987). These albums received platinum certifications and are considered to be the most successful work of Dep Leppard. Hysteria was a huge hit, topping Billboard 200, UK Albums Chart, and a variety of European charts. The number of platinum certifications is impressive.

In 1984, Rick Allen got into a serious car accident and lost a hand. He lost all hopes of returning to the stage since playing the drums with one hand seemed impossible. However, Def Leppard invested a lot of money into developing a special drum set that Allen could play with his feet.

In 1995, Def Leppard managed to get into the Guinness Book of World Records. In 24 hours they performed on three different continents. The same year, they released a compilation album Retro Active, which was a hit in UK, USA, and Canada, earning two platinum certifications.
In the end of 1990’s the band went on a short hiatus.

In 2000, they returned to the stage but slightly changed their style to a softer and more melodic sound. They released 4 more studio albums, the latest one to date being Def Leppard (2015). It reached the 11th spot on UK Albums chart and 10th spot on Billboard 200. The band continues to create new music and perform live.