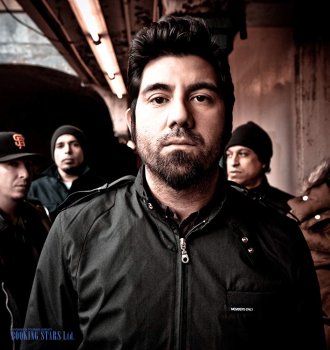 Deftones appeared in 1988 in Sacramento, California. Today, the original founders of the band are still in the lineup. They are the vocalist and guitarist Chino Moreno, guitarist Stephen Carpenter, and drum player Abe Cunningham. In 1998, the artists invited a keyboardist Frank Delgado. In 2009, the bassist and back vocalist Sergio Vega joined the band. In the past 20 years, the lineup changed many times with numerous artists coming and going.

Stephen Carpenter, Abe Cunningham, and Chino Moreno were friends since high school. Carpenter enjoyed heavy metal while Moreno liked punk rock. The teenagers spent a lot of time skateboarding. On weekends, the aspiring musicians got together in the garage and played the guitar. With time, Cunningham learned to play the drums.

Rumors have it that the group got the money for buying recording equipment when the 15-year-old Stephen Carpenter was hit by a car while skateboarding. After the accident, the driver paid him a hefty amount, which became the band’s initial capital. The boy suffered serious injuries and couldn’t walk for several months.

With time, the band changed the location from the garage to the nightclubs. Their music was gaining popularity among the young fans from Sacramento, San Francisco, and LA.

Between 1992 and 1993, the group was working hard to find a label. They self-released four demo albums, Deftones (Demo 1), Deftones (Demo 2), Engine Number Nine/7 Words, and (Like) Linus. The dream came true. In 1994, the band was noticed by Maverick Records. With the label, the artists recorded their last demo album, Root/Nosebleed.

In 1995, Deftones presented the first LP, Adrenaline. The album turned out fairly successful. It reached the 23rd spot on Top Heatseekers Chart. The LP featured such popular tracks as" Minus Blindfold", "One Weak", "7 Words", "Nosebleed", and "Birthmark". Years later, the album earned a platinum certification. At that time, many fans tried to book Deftones for their events, and the musicians often agreed.

The group’s second LP, Around the Fur, came out in 1997. It conquered Top Heatseekers Chart and came in 29th on Billboard 200. The album brought the artists international recognition, appearing on the charts of the UK, France, Germany, Finland, and the Netherlands. The LP featured such hits as "My Own Summer (Shove It)", "Around the Fur", and "Be Quiet and Drive (Far Away)".

In 1998, the musicians presented a debut EP, Live, which became a big hit in France and earned the approval of the American fans.

In 2000, the group came up with another LP, White Pony. The single “Elite”, featured in the album, brought Deftones a Grammy Award for Best Metal Performance. The album reached the third spot of Billboard 200.

In 2001, the musicians presented their second EP, which they called Back to School (Mini Maggit). It became very popular in the UK, France, and Australia.

In 2003, the group recorded, Deftones. It came in second on Billboard 200. Their next album, Saturday Night Wrist, which came out in 2006, didn’t manage to become as financially successful as the previous LP but still climbed to the 10th spot of Billboard 200.

In 2010, Deftones released Diamond Eyes. The big break between the albums wasn’t voluntary. In 2007, when the group was recording its sixth LP, Eros, Cheng got into a serious car accident. The album never came out. However, Diamond Eyes reached the 6th spot of Billboard 200 and conquered many European charts

The next LP, Koi No Yokan, which appeared in 2012, also reached a high spot on Billboard 200. Many songs featured in the album became hits.

In 2013, the artists presented a new EP Live: Volume 1 – Selections from Adrenaline, which didn’t become as successful as the previous albums.

The popularity seemed to be waning, but the artists didn’t give up. In 2016, they recorded Gore. It turned out to be highly successful, coming in second on Billboard 200 and reaching top-10 of many European charts.

In 2017, the group announced a new album, which is due out in 2019. The exact release date and the name haven’t been revealed yet.

How much does it cost to book Deftones:
Price inquiry
Deftones booking agent:
Contact agent
Deftones Contacts:
Send Deftones a message
« previous next »