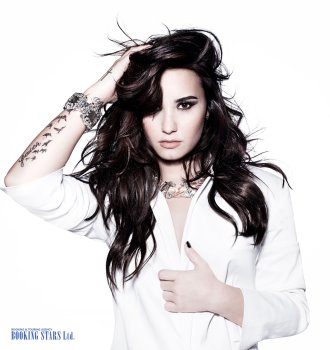 Demi Lovato was born on August 20, 1992, in Albuquerque, New Mexico. She is a singer, songwriter, and an actress. Lovato is mostly famous for such hits as “This Is Me”, “Skyscraper”, and “Heart Attack”. She holds numerous awards, including MTV Music Awards, People’s Choice Awards, and Teen Choice Awards.

In 1998, Lovato debuted as an actress in a children’s TV series Barney and Friends. In 2006, she played in Prison Break and landed a small role in a sitcom Just Jordan. The true fame came to Lovato when America saw the premier of a TV series Camp Rock, where Lovato played a 14-year-old girl who dreamed of becoming a singer.

Fame wasn’t as easy to bear as Lovato hoped for. She had to change schools due to frequent problems with schoolmates, hire security, and forget about personal life. Lovato had to watch her every step in order not to give adverse information to the tabloids.

In 2008, Lovato decided to try herself on the music scene and recorded her debut album Don’t Forget. When recording the album, Lovato received assistance from such celebrities as Justin Timberlake and Britney Spears. Unsurprisingly, the album sold 100,000 copies in just two weeks after the release. It reached the 2nd spot on Billboard 200 and the 9th spot on the Canadian album chart.

Lovato’s next albums Here We Go Again, Unbroken, and Demi were also very successful. Here We Go Again (2009) topped Billboard 200. Meanwhile, Demi (2013) received four golden certifications. It’s interesting that Lovato’s albums were more popular in Mexico, where her father was born than in the USA.

In 2012 and 2013, Lovato was invited to be a judge and a mentor on the TV show X-Factor, where she worked together with Britany Spears, Simon Cowell, and L.A. Reid.

In 2015, Lovato released a new album Confident. It sold over 200,000 copies in the USA, reached the 2nd spot on Billboard 200 and received a golden certification. A single from that album “Cool for the Summer” became a big international hit.

In 2016, Demi recorded two successful singles “Body Say” and “Without a Fight”.