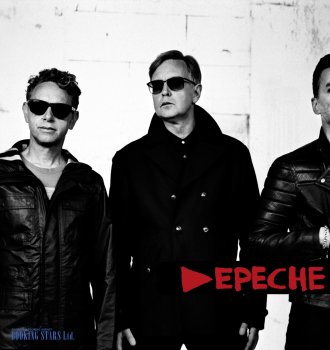 Depeche Mode began its climb to success as a follower of the “new romantic” style in the UK. Gradually, it evolved into one of the most famous electro-pop groups of the 1980s. It became one of the first bands in the world to use keyboards at the center of its music. The sound became darker, deeper, and more dramatic, turning Depeche Mode into one of the most successful alternative bands of its time.

The group’s story began in 1976 in Basildon, UK. Keyboardists Vince Clark and Andrew Fletcher started working together on creating a new band called No Romance in China. However, it fell apart quickly.

In 1979, Clark formed another band, French Look. He invited a guitar player and keyboardist Martin Gore to work with him. Shortly, Fletcher joined them, and musicians decided to change the name to Composition of Sound. Initially, Clark was the leading vocalist. However, in 1989, David Gahan joined the band and took the leading role. The artists changed the name once again. This time to Depeche Mode.

At first, the band performed at London’s nightclubs where artists managed to attract hundreds of fans. Their popularity brought the band a contract with Mute Records. In 1981, the group released the debut single, “Dreaming of Me”. Neither the first nor the second song became popular. However, the third single “Just Can’t Get Enough” reached the top-10 of the UK Singles Chart. The same year, the artists presented the debut LP, Speak and Spell, which earned immense popularity. After its release, many fans started trying to book Depeche Mode for private events.

The group was climbing to the peak of its popularity when Clark suddenly left the band. Together with Alison Moyet, he formed a group called Yazoo and pushed Depeche Mode to the brink of disbanding. However, the remaining artists didn’t give up. Martin Gore became the new leader. The artists invited Alan Wilder to take Clark’s place.

In 1982, the band released a new LP, A Broken Frame, which turned out just as successful as their previous work. The next album, Some Great Reward, which came out in 1984, was a commercial breakthrough. The single "People Are People" turned into an international hit. The album went platinum.

In 1986, Depeche Mode presented the next album, Black Celebration. It sold half a million copies in the USA and earned gold status. The LP climbed into charts all over the world. Next year, musicians released Music for the Masses, which featured three huge hits, "Strangelove," "Never Let Me Down Again," and "Behind the Wheel." Depeche Mode became mainstream. The album sold over three million copies. After its release, the band embarked on a promotional tour. The tickets to concerts sold out almost instantly.

At the beginning of the 1990s, alternative music was on the peak of its popularity. Depeche Mode turned into one of the most successful alternative bands. In 1990, the group presented Violator. It received three platinum certifications. The album featured such timeless hits as "Personal Jesus", "Enjoy the Silence," "Policy of Truth", and "World in My Eyes."

In 1993, the band presented a new LP, Songs of Faith and Devotion. In the album, the artists stopped putting an accent on electric guitars. The LP climbed to the top of the British chart anyway.

Even though the band was at the peak of its popularity, musicians started having personal problems. In 1995, Wilder left the group. Soon after that, Gahan tried to kill himself. The artist had to go through lengthy rehabilitation to fight his drug addiction.

Fans haven’t heard anything from their idols for four years. In 1997, the band decided to continue working as a trio and released a new LP, Ultra, which featured such hits as "Barrel of a Gun" and "It's No Good." The album’s success showed that Depeche Mode was still popular. A year after the release, the artists went on a tour to support their compilation album, The Singles 86>98. The band arranged 64 concerts in 18 countries, earning over a million pounds. After the tour, the group took another break. This time, it lasted three years.

In 2001, Depeche Mode presented a new album, Exciter. It featured such famous singles as "Dream On" and "I Feel Loved". The album was successful but didn’t manage to become as popular as the group’s work from the 90s.

Two years later, Gahan released his debut solo album, Paper Monsters, which featured a dark and depressive sound. Then Gore decided to go solo and recorded Counterfeit. Both musicians toured the USA and Europe to support their respective albums.

In 2005, the artists reunited to record Depeche Mode’s 11th album, Playing the Angel. The LP turned out very successful. It featured such hits as “Precious” and “John (The Revelator). The album topped charts in 18 countries and earned over 20 platinum certifications. After the album’s release, the band embarked on a tour. The artist performed for 2.5 million fans all over the world. In 2006, they presented a live album, Touring the Angel: Live in Milan.

In 2009, the band recorded a new LP, Sounds of the Universe. It reached the third spot on Billboard 200. Four years later, Depeche Mode released another album, Delta Machine. It came in second on the UK Albums Chart and earned several gold and platinum certifications in Europe. In 2014, musicians presented a live album, Live in Berlin.

In 2017, Depeche Mode recorded a new LP, Spirit. The lyrics were inspired by the American presidential race of 2016. The album came in sixth on Billboard 200. The single "Where's the Revolution" became a hit. The music video for the song collected over 19 million views on YouTube.