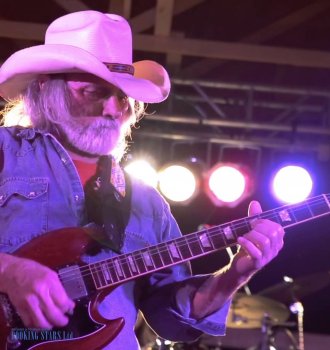 Dickey Betts was born on December 12, 1943, in Florida. He is a singer, songwriter, and guitarist. Betts is best known for his instrumental “Jessica”, which brought him a Grammy Award. Dickey recorded eight studio albums, the latest one to date being The Official Bootleg (2006).

Dickey Betts (real name Forrest Richard Betts) started his music career by playing with the band The Second Coming. Then in 1969, Dickey met Duane Allman. The same year, the duo created their own band. Allman was the leader while Betts was the second leading guitarist. Allman’s brother Greg was a vocalist. Betts and Allman managed to create a unique double guitar sound. Dickey also wrote a few songs for the band, including “In Memory of Elizabeth Reed” and “Blue Sky”.

The first album recorded by The Allman Brothers Band had the same name. It was released in 1969 and go great reviews. The same year they released the second album Idlewild South.

In 1971, Duane Allman died in a car accident. Brett and Greg became the group leaders. Dickey was the only guitarist. He started writing more songs. One of them “Ramblin’ Man” got to the top of Billboard Hot 100. Dickey’s most successful song “Jessica” was dedicated to his daughter, who was born on May 14, 1972.

In 1972, The Allman Brothers Band released another album Eat a Peach. The same year the band lost another remember in a motorcycle accident.

In 1973, the band released the album Brothers and Sisters. Most of the songs in that LP were written by Dickey. Soon the band members started having personal arguments and Betts decided to work on his solo career.

In 1974, he released his first album Highway Call. The next solo albums Dickey recorded as Dickey Betts & Great Southern.

In 1977, he released a hit single “Bougainvillea”, which got into many charts.

In 1989, Dickey formed Dickey Betts Band and recorded an album Pattern Disruptive, which was fairly successful.

Betts continues to work on his music career and performs live.