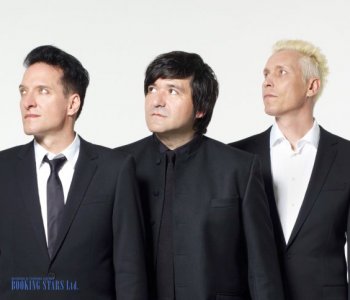 The name of the German group Die Arzte is translated as The Doctors. The band was formed in 1982. These punk rock musicians are considered extremely popular in Germany. They focus on ant-Nazi lyrics. Throughout its career, the band released more LPs than other groups in the history of German rock.

The group’s founders were Farin Urlaub, Bela B, and Rodrigo Gonzalez. Farin and Bela used to perform together with the group, Soilent Grün. After it fell apart, the two friends decided to try something new. In 1983, rock musicians won a local Berlin contest and earned enough money to release a demo album, Uns geht's prima. It helped them get a contract with a label.

In 1984, Die Arzte released a debut LP, Debil, which climbed to the 5th spot of the national German chart. Musicians were becoming more and more popular.

The second LP appeared in 1985. The artists called it Im Schatten der Ärzte. It earned gold certification and settled on the 53rd spot of the national chart.

Between 1988 and 1993, Bela and Farin tried to achieve success by working with other groups. However, that didn’t work out. Musicians decided to get back together. Upon reuniting, Die Arzte recorded two successful albums, Die Bestie in Menschengestalt (1993) and Planet Punk (1995). Both went platinum.

In the spring of 2000, the punk rock group embarked on a tour, Sie operieren wieder. They arranged 12 improvised karaoke shows and worked with Die Toten Hosen in the SO36 club.

The new studio album came out in 2000. The artists called it Runter mit den Spendierhosen, Unsichtbarer! Next year, before embarking on a new tour to support the LP, the artists arranged a two-hour live show online. Listeners got a chance to order songs. Fans were ecstatic about such a show and asked for more.

In 2005, the band recorded one more album, Devil, which was a remake of their debut 1984 LP. The new album featured additional new tracks as well as an unreleased single, "Füße vom Tisch".

In January 2011, after a long break, on their website, musicians posted several dates and said that something was coming. However, nothing happened on any of the dates. A year later, the band announced a release of a new LP, Auch. In the spring, group members started uploading promotional materials to YouTube.

The new album featured 16 songs and 32 music videos (two for each song). As a bonus, the fans got a cartoon video and one live video.
In November 2016, the band’s biography came out. It was called Das Buch Ä. The artists released an initial biography back in 2001. Fifteen years later, they added new facts and re-released the book.

In the spring of 2019, Die Arzte intrigued their fans by publishing a puzzle on the official website. The fans had to figure out which word was hidden. They could open one letter per week. Eventually, the word “Absсhied” appeared. In German, it means “Farewell”. The fans decided that the band was about to go on another hiatus. But soon after that, the artists released a new studio single, "Drei Mann - Zwei Songs". It seems as if the band is not going anywhere.