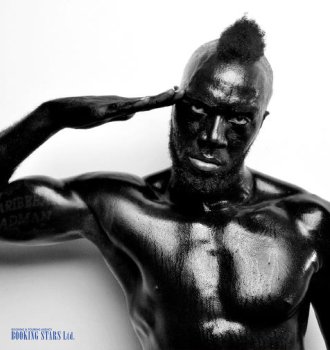 Benny-Demus is the world-famous producer, DJ, entertainer, screenwriter, composer, actor. He was born in St.Thomas, the USA

He has a huge number of fans in more than 250 countries. He performs in Hip-Hop, R & B, Dancehall, House Music styles.

Benny Demus, as energetic as his native Virgin Islands, is known the world over as an artist extraordinary. Acclaimed as a top-notch actor, producer, screenwriter, DJ and rapper, he has stamped his own ticket to success. He has thousands of fans in over 180 countries and is passionate about using his celebrity status and resources to improve the lives of others. Growing up knowing how hard it is to know your dreams firsthand, Benny-D. vowed to give opportunities to youth that he could only dream of at their age.

Flamboyant and energetic in his performances, Benny-D. quietly contributed to the success of many other popular artists. Respect my gangster. Over 100,000 and Handlin '! The original 'Hoj Shotta! Anyone can be familiar with his work with other celebrities such as Akon, Planet VI, Verse Simmonds, EVE, Tabi Bonney, Kardinall Offishall, Savage in New Zealand. However, there weren't always superstars in life putting his rhythms or DJ skills to the test. While Benny-D. first touched "steel wheels" at the tender age of nine, it was his harsh bustle and sleepless work that brought him from the island clubs of the 6th century to the world-sold stages of Germany, Los Angeles, New York, Paris, Uganda, Liberia, Senegal, Australia, Hong Kong, Korea, Greece, London, Abu Dhabi, Dubai and many others.

Fans and audiophiles alike can expect even more from Benny-D. in the very near future. As he gains traction, always remember that he is not just a DJ ... he is EXTREME ENTERTAINER; otherwise known as "the one worth looking at.

Benny-Demus is the best choice for your birthday party or any other corporate event! Fill in the application form on our website and enjoy the DJ's performance!