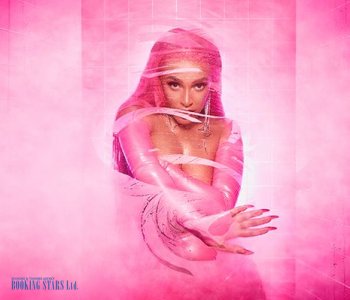 Doja Cat is an American singer who began her career in the 2010s with a worldwide hit song and video called Mooo! Another work from the performer's discography was included in the soundtrack of Birds of Prey: The Album and fell in love with millions of fans of foreign cinema.

Amalaratna Zandile Dlamini, known by her stage name, was born in California in 1995. The family, consisting of representatives of different religions and nationalities, lived in sunny Malibu by the time the daughter appeared.

A father named Dumisani Dlamini came from the Zulu tribe, in the United States of America he studied and acted in films. Unfortunately, the South African was not destined to become a great actor involved in grossing films.

The only work worth mentioning was Sarafina !, where the man appeared in the star company of Whoopi Goldberg and John Cani. The money received from the producers was used to buy a spacious house and arrange a comfortable life for a family replenished with a child.

Amala's mother and grandmother were members of the Jewish community. They practiced arts and crafts and decorative paintings. Thanks to their hobby, at a young age, the girl met a number of popular women and men who were related to the work.

In an interview with reporters, Doja Cat said that she was engaged in dancing as a child, and also mastered the basics of musical notation in one of the California music schools. The older brother was fond of rap and attended themed events on days when he did not play rugby, basketball or football with his comrades.

The girl, saturated with rhythmic sounds, tried to write songs in the style of Christina Aguilera, Gwen Stefani and Nicki Minaj. She was also close to the spirit of the Jamiroquai compositions, which caused a stir among the public in the late 1990s.

During my school years, I became interested in Indian and Japanese culture and mysterious traditions that had their own flavor. Amala studied epics such as Mahabharata and Ramayana, whose original language was dead ancient Sanskrit.

The public does not know anything about the personal life of the American singer, because she hides potential guys from journalists and fans. Amala's bright photos on Instagram stir up interest in the performer and generate comments from thousands of caring people.

A girl with a height of 165 cm closely monitors her figure and, thanks to classes in the gym, maintains a weight of 55 kg. Outrageous outfits, makeup and hairstyles shown in the pictures evoke envy and respect among women who are passionate about fashion

As a Libra by the zodiac sign, Doja Cat is not afraid of experiments and carefully thinks over his own image, preparing to shoot a video clip. For each single and album, a girl who has inherited the talent of a decorator thinks over the composition of the cover and draws a unique logo.

At the beginning of her creative biography, Amala thought about her pseudonym. As a result, the performer combined the name of the cat and the name of the weed. Then the girl composed a song and shot a test video, posting it on an Internet platform, where views are guaranteed for sure.

In 2013, Doja Cat signed a contract with RCA Records and released their debut EP with the cute and funny title Purrr! It harmoniously combined the trends of rap, R&B and dance disco, as well as elements of other genres that are part of the concept of modern glamor.

The video for the song So High, presented to the public, was highly praised by critics, the performer was called a child prodigy and a follower of the psychedelic style. The girl realized that she was keeping up with the times, after reading the positive comments, and decided to aim at a new audience.

In mid-2015, the Californian collaborated with popular musicians, releasing original remixes of early top hits. Regularly updating portfolios on YouTube and SoundCloud hosting met the hopes for recognition and began to bear fruit.

Real fame came to the performer shortly after the release of the single Candy, which was used in viral videos after being published on the TikTok platform. The composition prompted Doja Cat to create a full-length debut album, which became available online in mid-2018.

Along with the LP-disc, the singer Amala recorded individual tracks that took their worthy places in the charts of a number of European countries. Information about the shocking beauty from California went beyond America and flew overseas.

The listeners were delighted with the compositions Roll with Us and Go to Town, as well as the song that was not included in the album with a slightly absurd name Mooo! The video clips, which garnered millions of views on the YouTube channel, were like chaotic clippings from modern surreal cinema.

In 2019, Doja Cat updated the track listing for its debut album and released remixes of some songs featuring popular singers. Variations of Tia Tamera and Juicy made it to Billboard lists and earned good royalties in the late 2010s.

Feeling her own relevance, the girl closed in a recording studio and in a short period of time made a new album, Hot Pink. For the cover photo, the singer was almost completely naked and donned long gloves and a hot pink wig.

Compositions Boss Bitch, Streets and Say So became independent singles, with their release the recently presented disc hit the American hit parade. Getting into the top ten of Billboard and participating in the Jimmy Fallon show became the highest of the awards for the young performer.

In an interview about the new disc, Doja Cat admitted that she always tried to paint her own music with the colors she loved since childhood. Because of this, the compositions breathed with warmth and comfort, and the atmosphere was felt by every fan who listened to the radio or attended a concert

Popular American performers Salaam Remi, Blaq Tuxedo, Kurtis McKenzie and Tyson Trax helped the girl in her work on Hot Pink. Thanks to this, the album presented creative directions that have long awakened positive feelings among representatives of the cultural masses.

In early 2020, Doja Cat published a number of video clips, the talented Haley Sharpe starred in the video for the song Say So. Working with director Hannah Lux Davis was a new experience for the singer and required patience and incredible work from her.

Now the girl is planning a tour in support of the new album. The concerts, slated for summer and fall, will have to cover most of the country. After Amala announced her ambitious plans for the future, fans wrote words of support that performers always need.