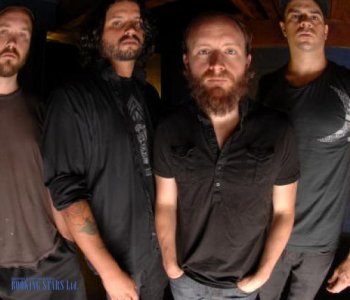 In the 1990s, two classmates, Mark Engles and Dino Campanella, started playing music together. After graduation, Drew Roulette and Gavin Hayes joined them. That’s how Dredg was formed in 1993. The band began by recording covers to the songs by Sepultura. Then the artists continued by creating their own music in a similar aggressive style. In 1997, musicians decided to change the style and recorded an EP, Orph, which combined a heavy sound with harmonious melodies.

After some time, in 1998, the band released the debut LP, Leitmotif, which featured songs that were substantially different from what musicians used to record. The band chose a free musical genre, which was a mix of the modern hardcore and eastern psychedelics. At the same time, artists experimented with alternative, progressive, classical, and jazz music. Songs from Leitmotif had interesting lyrics, which talked about the life of a wanderer, who wanted to make satisfaction for his sins.

In the next two years, the band was giving many concerts. The majority of performances was given in California. At the same time, the artists kept recording demo albums and sending them to different labels. Finally, in 2001, they caught the attention of Interscope Records, which offered them a contract. After signing, the band re-released their debut album and embarked on a tour of North America with other artists, such as Pressure 4-5, The Apex Theory, Alien Ant Farm, and Taproot.

After returning from the tour, Dredg started working on the next album, which got the name, El Cielo. While recording it, artists were inspired by Salvador Dali and one of his paintings, which was described in some of the songs. As usual, it was hard to classify the genre used by the group. The musicians kept changing styles.

The third LP, Catch Without Arms, came out in 2005. It brought the musicians commercial success. The album reached the 124th spot of Billboard 200. After the release, the artists embarked on a tour to support the LP. Next year, they presented a live album, Live At The Fillmore, which was the last release with Interscope Records. Soon after, the band signed a contract with Ohlone Recording.

In February 2007, the artists declared working on the fourth album. In the summer, information about the readiness of 12 tracks appeared. Fans were eagerly waiting for the release. However, artists stopped making announcements for several months. Finally, they said that the album is not due out earlier than 2008.

In spring 2008, musicians were busy with touring. They presented new songs from the upcoming album. The release of the LP was delayed once again, this time – until 2009. In February 2009, the artists announced the name of the upcoming album, The Pariah, the Parrot, the Delusion. It finally came out in June. The band recorded successful music videos for songs, "I Don’t Know" and "Information". At that time, many fans wanted to book Dredg for private events, but they seemed to be too busy with studio work.

While recording the album, artists were inspired by the essay written by a British writer, Ahmed Salman Rushdie, in which he talked about religion and society. The LP featured a series of songs called "Stamps of Origin", which mostly featured music and lacked lyrics.

In 2010, the media received information that the band was working on the fifth album. In the summer, Dredg started recording new songs. This time the process seemed to be faster. Fans were waiting for the release at the beginning of 2011. That period announced by the group on their official website. The LP’s producer was Dan the Automator.

Even though the artists seemed to be working hard on the new album, the release date was delayed once again. Finally, Chuckles and Mr. Squeezy, came out in May 2011. It earned positive reviews from the fans.

In 2014, Campanella suddenly announced a hiatus. The reason is still unknown.

In 2018, after a long break, Dredg promised to return with a new album, the name and the release date of which hasn’t been announced yet.

How much does it cost to book Dredg:
Price inquiry
Dredg booking agent:
Contact agent
Dredg Contacts:
Send Dredg a message
« previous next »