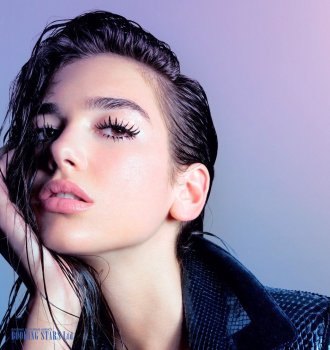 Dua Lipa was born on 22 August 1995, in London. Her parents are Albanians from Kosovo. The love for music Lipa got from her father, a singer Dukagjin Lipa. When Kosovo became independent, Dua’s family moved there from the UK. The singer’s name means “love” in Albanian, which is perfect for the music career. Lipa never had to think about a pseudonym.

When Dua was 14, she started recording cover versions of her favorite songs and uploading them to YouTube. In 2010, the young woman returned to London to proceed with her music career. Sometime later, she got a few modeling gigs. In 2013, she landed the leading role in the ad for the show "The X Factor".

In 2015, Dua signed a contract with Warner Music Group and started working on her debut studio album. The promotional single "New Love" came out in the summer. It didn’t enter the charts.

The second single “Be The One” came out in the fall and was much more successful than her first work. Lipa became popular in many European countries. The song topped charts in Poland, Belgium, and Slovakia. It reached high spots on the charts of many other countries, including Australian and New Zealand. Many fans tried to book Dua Lipa for their events and birthdays.

In 2016, Lipa released her third single “Last Dance”. It was followed by “Hotter Than Hell”. The latter became a big hit and reached the 15th spot on UK Singles Chart. The song brought the young artist a Popjustice £20 Music Prize as "Best British Pop Single".

In August, Dua presented her 5th single "Blow Your Mind (Mwah)", which reached the 30th spot on UK Singles Chart. It was the first Dua’s song to enter Billboard Hot 100, where it debuted on the 72nd position. At the end of the year, Lipa was nominated for BBC and MTV Europe Music Awards.

In June 2017, the singer presented her debut album, Dua Lipa. Seven songs from the LP entered UK top-40. “New Rules” topped the British chart. It also reached the 6th spot on Billboard Hot 100 and 2nd spot in Australia. At the end of the year, Dua was nominated for 14 awards in 21 categories. She won nine prizes.

At the beginning of 2018, Lipa was nominated for 5 Brit Awards. She won two of them, "British Female Solo Artist" and "British Breakthrough Act." The singer received four Globe Awards nominations but haven’t won any yet.

One of the songs from the debut album, "High", which was produced by Whethan, became part of the soundtrack to the romantic drama Fifty Shades Freed, which came out in February 2018. At about the same time, Lipa’s debut album reached the 27th spot of Billboard 200.

In March 2018, in her Instagram, Dua Lipa announced her plans for the second studio album.