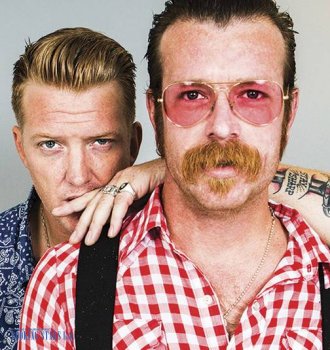 Garage rock group Eagles of Death Metal appeared in the USA in 1998. The project came to life thanks to the member of Queens of the Stone Age, Josh Homme, and his friend Jesse Hughes. The young men attended the same school and played football together. With time, they went their separate ways. Homme became a musician and formed his own band, Kyuss. Jesse finished college and decided to be a reporter.

After some time, the two friends reunited. Jesse was going through a tough period after divorcing his wife. Homme tried to prevent his friend from getting depressed and offered him to take up music. In 1998, the young men started jamming together. Hughes played the guitar and sang while Josh played the drums, bass guitar, and other instruments. They called the duo Eagles of Death Metal, even though their music had little to do with death metal. Initially, the artists played true garage rock, which was created under the influence of The Rolling Stones music.

In one of the interviews, Jesse talked about the origins of the group’s name. One of his friends was trying to explain the benefits of the death metal and played several songs by Vader. Josh noted that the music sounded like Eagles playing death metal.

After some time, Josh said that initially, the group planned to mix bluegrass guitar, drums, and vocals that were similar to Canned Heart’s. In 1998, the duo was part of Homme’s project The Desert Sessions. Later, the musician got involved with Queens of the Stone Age, and the group went on a hiatus.

Five years later, in 2004, the band got back together. Almost immediately, the musicians recorded an album, Peace, Love, Death Metal. The lyrics were mostly created by Hughes. Only the track "Stuck in the Metal" was borrowed from Stealers Wheel. The album was recorded at AntAcidAudio.

Eagles of Death Metal’s simple garage tracks became popular among marketers. They appeared in the ads of many companies, such as Nissan, Pontiac, Ask.com, and others. The music from the debut album was often used for movie promotions. After the release, the band went on a tour of European cities together with The Distillers. Many fans wanted to book Eagles of Death Metal for private events at the time.

The second LP recorded by the group came out in 2006. The cover of Death by Sexy had elements used in Sticky Fingers by The Rolling Stones and Too Fast For Love by Motley Crue. The name reflected the sexual subtext of the songs.

The style and the mood of the second album were similar to the first one. However, some fans noted that it featured fewer exciting songs. Critics called the LP a focused release. It reached the 113th spot of Billboard 200.

In 2006, the group performed as an opening act for the band Stroke. They spent the year working with different groups. At the end of 2006, the artists collaborated with Guns N’ Roses.

In 2008, Eagles of Death Metal presented their next LP, Heart On. It featured such popular tracks as "Wannabe in L.A." (later, the group filmed a music video for this song), "Anything ’Cept the Truth", "High Voltage", and "Secret Plans". Critics and fans noted that the band changed its style significantly. The good old garage boogie turned mainstream. The rhythm slowed down. The album featured the duo’s first ballad "Now I’m a Fool". The LP was more successful than the predecessor, reaching the 57th place on Billboard 200.

In 2010, the band’s bass player, who joined the duo during the concerts, was diagnosed with cancer. The group members arranged a fundraiser to help fund his treatment.

In the summer of 2015, Eagles of Death Metal announced the release of the new LP, Zipper Down. It featured such successful songs as "Complexity", "Got a Woman", "I Love You All the Time", and "Skin-Tight Boogie". In November, during a terrorist attack in a Paris theater Bataclan, one of the marketing team members died. The duo didn’t get hurt.