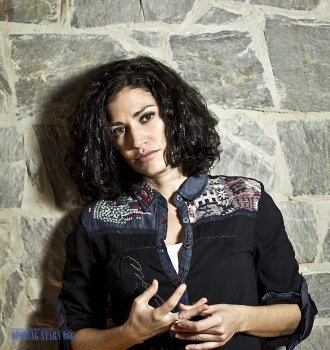 Elena Gadel was born on 12 November 1982 in Barcelona. Her father was born in Granada and her mother in Estremadura. Elena loved music since childhood. She performed with the school choir. When the girl turned 14, Gadel joined a gospel group Masoulfield, together with which she traveled all over Catalonia, Valencia and visited Andorra.In 2002, the young woman left the band and was accepted into a TV music show Operación Triunfo 2002 TVE, where talented people competed for the top spot and a label contract. Elena didn’t win the show but left it near the very end. During the show, the young singer was noticed by the representative of Vale Music label. He offered Elena to record a single. If the sales would exceed 200,000, she would get a contract with Vale. The singer agreed and recorded “Es Por Ti.” The song sold over 100,000 copies and received a platinum certification. However, it didn’t reach the 200,000 mark and Elena didn’t get the contract.

However, the girl didn’t seem upset. Together with two other Operación Triunfo contestants, Tessa and Marey, she formed the band Lunae. The trio released LP Olor a nuevo (2003). The album became popular due to the single “Hechizada”, which became the hit of summer 2003. In 2005, the group disbanded since all three girls wanted to pursue a solo career.

After Lunae fell apart, Elena started performing in musicals. She landed a role in Mar i Cel, which brought her recognition and a Spanish Theatre Award. Thanks to the overwhelming success, Elena got a role of Rizzo in the Spanish rendition of the famous American musical Grease. Elena also landed a few roles in theater plays and participated in talent shows.

In 2010, Gadel released her first solo album Tocant fusta. It was rather popular in Spain but she still spent most of her time performing in musicals. Elena was getting one role after another. It was becoming harder and harder to book Elena for any event.

In 2013, she was one of the judges in the music program Oh Happy Day.

In 2016, Elena portrayed the rose in the musical El Petit Príncep (Little Prince).