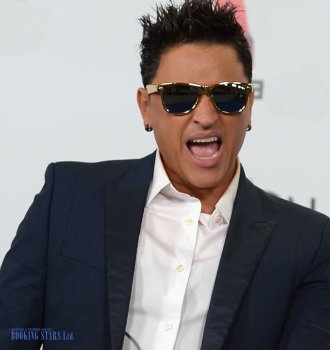 Elvis Crespo Diaz was born on July 30, 1971, in New York. When the boy turned six, his mom took him back to Puerto Rico. Elvis loved music since childhood but for some time he was dreaming of becoming a basketball player. However, Elvis wasn’t tall and talented enough to play ball so he decided to dedicate his life to music. When Crespo was a teenager, he joined a merengue group.

When Elvis turned 17, he was invited to join Willie Berrios orchestra. Then he became a part of Lenny Pérez y el Grupo Uno. Two years later, Crespo started performing with Toño Rosario orchestra, with which he stayed for six years. After leaving the orchestra, Elvis started thinking about a solo career.

In 1998, Elvis released his first album Suavemente. The singles “Suavemente” and “Tu sonrisa” became very popular. Thanks to the success of the debut album, a year later, the artist released 2 LPs in a row Pintame и The Remixes. The singles “Píntame” and “Por el caminito” were very successful in Puerto Rico.

In 1999, Suavemente was nominated for a Grammy award as The Best Tropical Album. The LP beat many sales records in Puero Rico and abroad.

In 2000, Crespo released Wow! Flash. Two years later, he recorded Urbano, where he continued to demonstrate the obvious talent for merengue through such songs as “Báilalo” and “La cerveza”. The singer’s popularity was on the rise. It was becoming almost impossible to book Elvis Crespo for a private event.

In 2004, Elvis recorded his fifth album Saboréalo. The single “Hora enamorada” topped the local charts. After the release of this LP, Elvis took a break and came back only 3 years later.

In 2007, he recorded an album with a self-explanatory name Regresó el Jefe (The return of the boss).

In 2008, Crespo became the first Latin musician, who recorded a song live from Las Vegas.

In 2013, Crespo recorded One Flag. The LP featured 12 tracks. The name of the album shows the musician’s wish to erase borders in Latin America. Among other artists, who worked on the album, were Emilio Estefan and Nacho from Chino & Nacho.