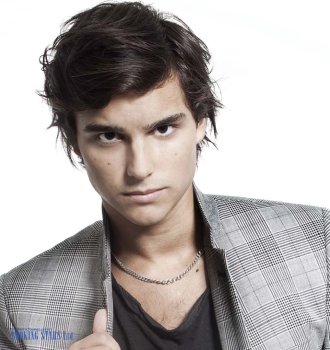 Eric was born on the 29th of October 1990 in the family of Walid Saade and Marlene Jacobson. When a kid, he watched Michael Jackson’s clips on TV. Jackson’s music served as motivation for him to pursue a career as a singer. The list of other musicians and bands that had an influence on his own music involves Robbie Williams, Justin Timberlake and the Backstreet Boys. His first performance took place when he was only 6 years old. He sang a song during his mother’s wedding (Saade’s parents divorced when he was 4). At the age of 13, Eric started writing his first songs. These songs of him made him one of the winners of the Swedish Popkorn contest. The 4 winners of the contest became known as What’s Up band. The band presented its debut album “In Pose” in 2008. 2 singles from the album became very popular and were included in the Swedish music charts.

Eric did voice-over for the Swedish version of the film Camp Rock in 2008 and hosted the show “My Camp Rock” a year later. Those were the first steps he made to rise to fame. Soon after the show was over Saade made a decision to leave the band and pursue a career as a solo musician.

He signed a contract with Roxy Recordings and released his debut single entitled “Sleepless” in 2009. Even though the song wasn’t very popular, it was made available on iTunes and included in a number of Swedish charts.

In the beginning of 2010, Saade performed the song “Manboy” written by Frederik Kempe during the 2nd semi-final of Melodifestivalen (the Swedish qualifier for the Eurovision Song Contest). He was awarded the 3rd place. The single itself was released in March of the same year. It topped the charts of Sweden. The acoustic version of the single was certified Platinum in the country. Two months later, Eric presented to the public his debut album “Masquerade”.

In 2011, Eric took part in Melodifestivalen once again. He performed the song “Popular” that was also written by Kempe. He was the winner of the 3rd semi-final and the winner of the final that took place in Stockholm. He was chosen to represent Sweden at Eurovision Song Contest 2011 that was held in Düsseldorf. According to the results, Saade was awarded the 3rd place with a total of 185 points. After the contest, he presented to the public two more albums: “Saade Vol.1 (on the 29th of June)” and “Saade Vol.2” (on the 30th of November).

In 2015, he was selected to represent Sweden at the 55th Eurovision Song Contest. He performed with the song “Sting” that was the result of collaboration between Sam Arash Fahmi, Frederik Kempe, Hamed “K-one” Pirouzpanah and David Kreuger. The song earned him the 5th place. In May of the same year, his new single entitled “Girl From Sweden” was presented to the public.