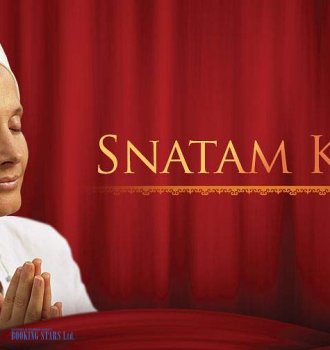 Snatam Kaur is considered to be one of the most popular new age singers in the world. Thousands of copies of her albums are sold every year. Three of her albums managed to make it into the top-20 in 12 months. In 2003, Kaur received a Grammy nomination for The Best New Age Album. In 2009 and 2010, her albums were constantly entering top-10 of Indie New Age and Indie World Music on Amazon.

Snatam Kaur was born in 1972, in Trinidad, Colorado (USA). Her exact date of birth is unknown to the public. Her parents were fans of Indian culture and when Snatam was six years old, they went to explore the country. He parents’ preferences and travels influenced Kaur’s future career. She liked music when she was still in school. When Kaur was a teenager, she played the violin and performed at all the school plays and musical events.

Even though Kaur loved music and India, she enrolled at Mills College and majored biochemistry. After receiving her bachelor’s degree, Snatam went to live in India, where she studied culture and religion. She also participated in spiritual practices.

In 1997, upon returning from India, Snatan decided to work as a biochemist. She even helped create a cereal line for Peace Cereal Company. Soon Kaur got a chance to reveal her music talents. She joined The Peace Family band, the members of which she met during spiritual practices, and realized that she wants to dedicate her life to music. Shortly, the young woman decided to pursue a solo career.

In 2000, Kaur signed a contract with Spirit Voyage Records and released her first album, Reunion. The founder of the label Ganesha Singh helped her record the LP. He played the guitar and took on the role of a producer.

In 2001, Snatam started her rise to the popularity peak. She worked with the musicians from Spirit Voyage band and recorded one album after another. The singer mixed several genres. In her albums, you could find Tabla rhythms, Indian chants, and unique melodies created with flute, sitar, piano, and other instruments.

In 2005, Snatam decided to dedicate herself to music in full. The company, where she was working as a biochemist, decided not to fire the talented singer but make her a brand ambassador. Every year the company donates 10 % of its profits to the cause of peace on Earth. Snatam with her tour Celebrate Peace was a perfect candidate for the brand ambassador.

Kaur’s concerts are always filled with inspiring, encompassing, and calming music. Her songs conquer the hearts of many people, even if they aren’t new age music fans. Even though Kaur spends a lot of time recording albums and performing live, she finds moments to teach children yoga and meditation. She often invites kids to sing with her on stage during her concerts.

Together with other musicians, Snatam visits schools, poor neighborhoods, and jails to give all types of people a chance to listen to live music.

Knaur recorded over 20 albums. The last one to date Light of the Naam: Morning Chants was released in 2014.

If you are looking for a booking agency with a wide range of possibilities, you have come to the right place. At Booking Stars Ltd., we have a large team of musician booking agents, who are ready to cater to your needs.

We help our clients arrange a variety of events, from corporate outings to weddings. If you would like to book an artist but don’t know where to start, we can help. As one of the best live music booking agents in Europe and beyond, Booking Starts Ltd., is always ready to make your event special.

We offer booking online for all our clients so you can start organizing your event in the comfort of your home or office. Take the time to browse our large catalog. You are bound to find your favorite artist there.

A Musician Booking Agency That Cares

At Booking Stars Ltd., we help with booking talent, finding the best option for your event, arranging all the formalities, drafting contracts, and saving money.
Quick and efficient entertainment booking is our forte. We have been helping clients from all over the world to find the best musicians for their needs. Regardless of your plans, budget, and requirements, our booking agency can help you arrange the event of your dreams.

Many people make a mistake believing that musician booking agencies are out of their league. We offer high-quality services at a reasonable price and take care of all booking nuances for the organization process to go smoothly.

We are the booking managers you have been looking for. Give us a call today.