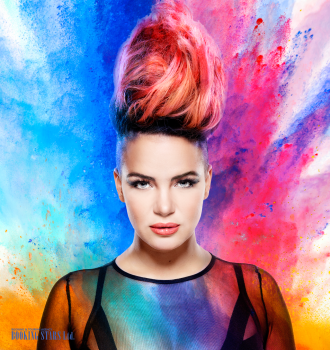 Eva Simons - this Dutch vocalist and songwriter was born to the family of the well-known music artists. Therefore, it can be said that Eva inherited her talent. Johny Meijer, her grandfather, was an accordionist who gained international popularity. Actually, there is a statue of him in Amsterdam, the hometown of Eva. Her mother Ingrid was a well-known vocalist that worked in collaboration with DJ Paul Elstak and T-Spoon. Eva’s father was a pianist. It was him who inspired Eva to learn how to play the piano and pursue a career as a vocalist herself.

Eva was born on the 27th of April 1984. When a teenager, she was part of Jody’s Kids. This ensemble provided vocals for the production of music. Once she graduated from the Conservatorium van Amsterdam, she took part in the Dutch talent show “The Rivals”. By the end of the show, Eva was selected as a member of the girl band “Raffish”. The single of the band “Plaything” gained popularity in 2005, not long after the debut EP of the band was presented to the public. Still, the next singles released didn’t turn out to be as popular as expected and Eva left the band in summer 2005.

From now on, Eva pursued a career as a solo singer and songwriter. Her debut single called “Silly Boy” was more than successful. More than 4 million people watched it on YouTube. The song became popular internationally, including not only Europe, but also North America and Australia.

The single “Take Over Control” produced by DJ Afrojack resulted in a worldwide fame on the parts of both DJ Afrojack himself and Eva. It was certified Platinum in Australia and Gold in the US. It became №1 dance hit all over the world. Besides, Eva received a BMI award for her contribution to the writing of the song.

While on a worldwide tour, Simons signed a contract with one of the major US labels. As a result, she worked in collaboration with LMFAO for his track “Best night”. However, this was her collaboration with Will.I.Am that marked the beginning of her career as internationally known singer. Together they worked on the singles to be presented in his solo album #willpower. The single “This is Love” became number 1 song in the top charts of the UK and a number of other countries.

In 2013, Eva accompanied Beyoncé in “The Mrs. Carter Show World Tour” in the Netherlands.