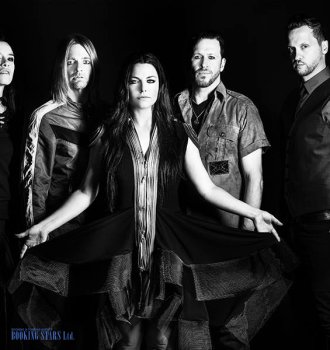 A popular rock group Evanescence was formed in 1995 in a small American city, Little Rock, Arkansas. Its founders, vocalist Amy Lee and guitarist Ben Moody met when they were still students. The love for music united young artists, and they started writing songs, which soon appeared on local radio stations.

In 2000, the band recorded a demo album, Origin. Beside their early songs, it featured new tracks. They were written after the David Hodges (keyboards and backing vocals) joined the group. After the demo came out, many music magazines wrote positive reviews. The album was considered successful. Later, Rocky Gray (drums) and John LeCompt (guitar) joined the band. However, the appearance of new members didn’t make the band popular. The group was struggling to gain international recognition, which wasn’t far away.

In 2002, Evanescence signed a contract with Wind-up Records and started writing Christian rock music. The song “Tourniquet” appeared on many Christian radio stations. However, Ben Moody was against this genre and declared his discontent in one of the interviews. This led to disagreements between the band members. As a result, David Hodges left the group in December 2002.

With the support of an independent music producer Dave Fortman, the band recorded several songs, which were featured in the debut LP Fallen (2003). The vocalist of 12 Stones, Paul McCoy, helped record the album.

After the album came out, the band woke up famous. For several years, Evanescence was conquering American and British charts. The artists were nominated for five Grammys and won two of them. Billboard magazine called Fallen one of the most popular albums in the USA. The fans tried hard to book Evanescence for private events.

In 2003, a bass guitar player Will Boyd joined the band. In the fall, the group released three hits, “My Immortal”, “Going Under”, and “Everybody’s Fool.” The music videos for these songs climbed to top spots of MTV lists. At the end of the year, the band faced new lineup changes. Ben Moody left Evanescence due to disagreements with the members. Terry Balsamo from Cold replaced him.

In 2004, the new lineup released a live album Anywhere but Home, which they recorded in Paris. Several songs from this album were featured in the movie Elektra.

It took the band some time to release the next album due to an unexpected disease, which struck Balsamo, and the replacement of the manager. Finally, in 2006 they presented The Open Door, which conquered Billboard 200 and sold over 5 million copies worldwide.

Soon after the release, the band suffered through new lineup changes. Will Boyd left the group. Tim McCord from Revolution Smile took his place. In May 2007, John LeCompt and Rocky Gray said their farewells. Troy McLawhorn and Will Hunt from Dark New Day joined the band.

In the summer of 2009, Amy Lee announced the group’s reunion and its plans for a new album. The third LP, Evanescence, came out in 2011 and topped Billboard 200. Even though that album appeared on many world charts, it was less popular than the group’s previous work.

In 2017, the band released a new LP, Synthesis. It reached the 8th spot on Billboard 200 and the 23rd position on UK Albums Chart.

Even though the musicians are not as popular as they used to be, they work hard on new music and perform all over the world.