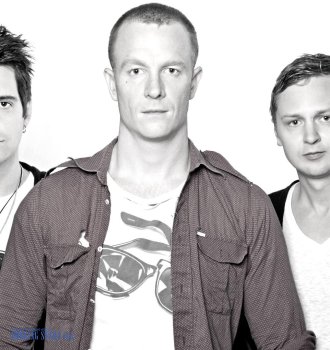 The rock band Eve 6 was formed in California in 1995. The current lineup includes Max Collins, Jon Siebels, and Tony Fagenson. They are mostly famous for such hits as “Inside Out”, “Promise”, and “Here Is To The Night”.

Initially, the band’s lineup included Max Collins (vocalist and bass guitarist), Jon Siebels (guitarist), and Tony Fagenson (drums). For some time, the musicians called themselves Yakoo. Then they changed the name to Eleventeen. The name Eve 6 came much later.

In 2000, Eve 6 released the second album Horoscope, which was just as successful as the predecessor. It reached the 34th spot on Billboard 200 and was certified golden in the USA and Canada. The album included to hit singles “Promise” and “Here Is to The Night”. It was the last very successful album released by the band.

In 2003, the Eve 6 released a new album It’s All In Your Head. Compared to the other two LPs, it was a failure. The band decided to split. The band members gave one last concert in 2004 and went their separate ways.

During the hiatus, (2004 – 2007) Collins and Fagenson worked on a side project The Sugi Tap. In 2007, it was put on hold due to the reunion of the band. The lineup of the band changed several times but by 2012, all original members were back together.

In 2012, the band released a new album Speak in Code, which reached the 40th spot on Billboard 200. Eve 6 continues to work on new songs and perform live.