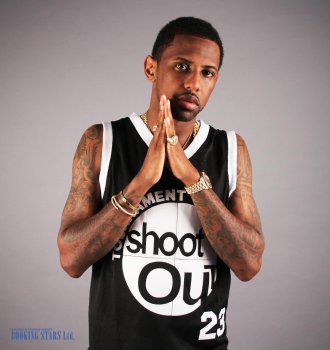 Fabulous’ real name is John David Jackson. He was born on 18 November 1977 in New York. His exotic appearance is due to the mix of African American and Dominican heritage. John started showing interest in music in high school. One day, he attended the radio show of a popular artist DJ Clue. At that time, he started thinking about a solo career. Soon he signed a contract with DJ Clue Desert Storm and Elektra Records.

In 2001, Fabolous released his 1st album Ghetto Fabolous. The LP was very successful. It sold a million copies in the USA. The singer woke up famous thanks to such hits as “Can’t Deny It” and “Young'n (Holla Back)“. More success was awaiting the artist in 2003. He recorded a new popular LP Street Dreams, which featured such hits as “Can’t Let You Go“ and “Into You“.

In 2004, Fabolous decided to find a new label. He canceled his contract with Elektra and signed a new one with Atlantic Records. With Atlantic Records, he released only one album, Real Talk, which was very successful and earned a gold status. Two years later, the singer cancelled the contract and signed a new one with Def Jam Recording. At the same time, he created his own label Street Family Records.

In 2007, the rapper recorded a new LP, From Nothin' to Somethin’. The album quickly became popular. It topped Top Rap Albums and Billboard Top R & B / Hip-Hop charts. The album climbed to the 2nd spot of Billboard 200. In the first week of sales, the LP sold 159,000 copies. It featured such popular songs as "Diamonds", "Do the Damn Thing", "Return of the Hustle", "Make Me Better", and "Baby Don't Go". At that time, many fans wanted to book Fabolous for their events.

In 2009, Fabolous recorded his fifth studio album, Loso's Way. It debuted on top of Billboard 200. In the first week, the album sold over 99,000 copies. The critics gave the record high scores. Most popular songs were "Throw It in the Bag", "Tricky", "My Time", "KC", "Everything, Everyday, Everywhere". The first one earned a platinum status in the USA. Some singles were recorded together with such artists as The-Dream and Jeremih. In order to promote the LP, Fabolous presented a short film with the same name. The film’s duration is 33 minutes and 3 seconds.

In 2012, the musician announced the recording of the 6th studio LP, Loso's Way 2: Rise to Power. He started working with Pusha T, Trey Songz, J. Cole, Cassie, Wale, and Joe Budden. Between 2012 and 2014, he released two singles from the upcoming album, "Ready" and "When I Feel Like It". The release was constantly delayed and eventually cancelled.

In 2014, Fabolous released The Young OG Project, which climbed to the 12th spot of Billboard 200. The rapper said that the songs from the LP were inspired by the 1990’s.

In 2017, Fabolous presented a new LP, Friday on Elm Street. It features several songs, which were recorded together with such artists as French Montana, Future, and Swizz Beatz.

In 2018, he was arrested in charged with domestic violence against his girlfriend.

Today, the artist is working on new songs and performing live.

How much does it cost to book Fabolous:
Price inquiry
Fabolous booking agent:
Contact agent
Fabolous Contacts:
Send Fabolous a message
« previous next »