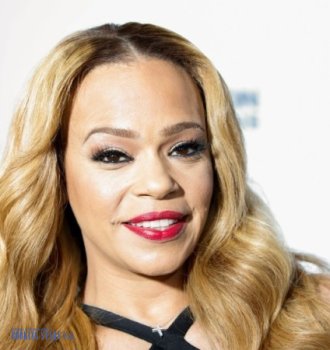 Faith Evans is a singer, actor, and songwriter. Her full name is Faith Renee Jordan. The artist was born on 10 June 1973. Faith’s impressive vocal skills became obvious when she was just four years old. The girl sang in a church choir in Newark, New Jersey where she grew up.

While singing in a local church choir, the girl learned a lot about music. Faith realized that she was born to become a singer.

After high school, she enrolled at Fordham University to study jazz and classical music. Even though Faith was getting excellent grades, she decided to quit school and focus on her singing career. The young woman couldn’t wait to conquer the stage and become a celebrity.

Faith Evans tried working with different bands as a back vocalist. In later interviews, she talked about how hard it was to work at first. However, with time, the offers started getting better and better. She wrote lyrics for such celebrities as Christopher Williams, Pebbles, and Mary J. Blige.

One day, Evans met a popular singer Puff Daddy. She was invited to be the back vocalist for some of his songs. The rapper was impressed with Faith’s talent and offered her a contract. Evans became the first woman to sign a contract with Puff Daddy’s label Bad Boy. Soon, she started released solo tracks.

In 1995, the artist presented her debut album, Faith. It became very successful, earning platinum status in the USA. Such singles as "You Used To Love Me", "Soon As I Get Home", "Come Over", and "Aint Nobody" became gold.

The same year, Evans recorded a single “Kissing You”, which was used as a soundtrack to the movie, Waiting to Exhale. Soon after, the singer married a popular rapper Notorious B.I.G. Two years later, he was shot on the street. Evans became the most famous widow in the world of hip-hop.

After her husband’s death, the singer recorded a single “I’ll Be Missing You”, which became platinum three times and topped American and European charts. After the release, Faith left the music business for a short time.

At the end of 1998, the artist released a new studio album, Keep The Faith. Critics gave it positive reviews. Allmusic called it one of the best soul-pop albums of the 1990s. Eventually, the LP became platinum and Evans went on a long tour to promote it. At that time, many fans wanted to book Faith Evans for private events.

The third LP, Faithfully, came out in 2011 with the assistance of the label, Bad Boy. To record it, the singer invited such famous producers as The Neptunes and Cory Rooney. The album reached the 14th spot on Billboard 200 and climbed to the 2nd place on Top R & B / Hip-Hop Albums Chart.

In 2004, Evans canceled her contract with Bad Boy. The same year, together with the new husband Todd Russaw, she was arrested for drug possession. Faith was released and signed a new contract with Capitol Records. The singer started working on a new album, The First Lady, which came out in 2005. The LP came in second on Billboard 200 and topped Top R & B / Hip-Hop Albums Chart.

In 2010, after a long break in recording albums, Evans created her own label, Prolific Music Group. She began working with such celebrities as Keyshia and Raekwon. At the end of the year, the artist signed a contract with E1 Entertainment and released her fifth LP, Something About Faith, which stayed on the US Billboard Hot R & B / Hip-Hop Songs Chart for several weeks.

In the summer of 2010, Evans was arrested for drunk driving but was released. In 2011, she divorced Russaw. The couple agreed to go through rehab and the charges were dropped.

In 2013, Evans announced her plans to work on the next LP, Incomparable. To record it, she invited such celebrities as Chucky Thompson, Mike City, Keke Wyatt, Karen Clark Sheard, and The Clark Sisters. The album came out in November and reached the 27th spot on Hot R & B/ Hip-Hop Songs Chart.

In 2016, the singer talked about her plans to finish the posthumous album for Notorious B.I.G. called The King & I. It came out in 2017.

In 2018, Evans married a DJ and producer Stevie J. Together they recorded a single “A Minute”, which will become a part of Faith’s new album, the name of which is currently unknown.