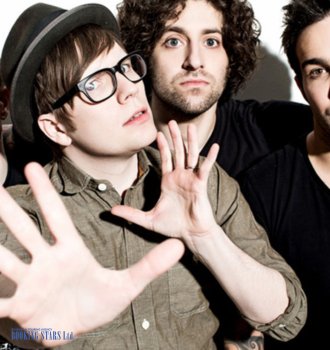 The rock band Fall Out Boy was formed in 2001 in Illinois. The current lineup includes Andy Hurley, Patrick Stump, Joe Trohman, and Pete Wentz. They are mostly famous for such hits as “This Ain't a Scene, It's an Arms Race", “Centuries”, and “Dance, Dance”. The band holds numerous awards, including MTV Video Music Award, Teen Choice Awards, and World Music Award.

When the four band members got together, they immediately started giving concerts. However, it took them some time to find the right name. What they did is ask the fans to help them out. At one of the concerts, the musicians asked how the fans wanted to call their band. Someone from the audience shouted “Fall Out Boy”. The group members liked the name and adopted it immediately.

In 2001, Fall Out Boy independently recorded a demo album. A year later, the recording label Uprising decided to release the album together with some songs by Project Rocket. The effect of their first album coupled with their impressive concerts was unexpected. When the band came back to the label to record a new album, they were no longer newbies without a name.

In 2003, Fall Out Boy signed a deal with Fueled by Ramen and released their first studio album Take This to Your Grave. The LP made it into the UK Albums Chart and was certified golden by RIAA and BPI.

In 2005, the band released their second studio album From Under the Cork Tree. The LP was a huge success. It made its way into a variety of charts, sold over 2.7 million copies worldwide and received a variety of platinum certificates in several countries. The hit single “Sugar, We’re going Down” brought the band a worldwide recognition.

In 2006, Fall Out Boy went on a North American and European tour. At the same time, they recorded a new album Infinity on High, which was just as successful as their previous LP. The singles “This Ain’t a Scene, It’s an Arms Race” and “Thnks fr th Mmrs” became immediate hits and the band went on a world tour.

In 2008, the band released another successful album with a French name Folie a Deux, which was also a success. The band went on another long tour and then took a break.

In 2013, they came back with a new LP Save Rock and Roll. They released two more studio albums, the latest one to date being Mania (2017). The band continues to work on new songs and performs live.