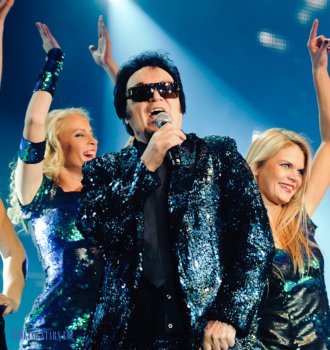 The Spanish-German producer, hit-songwriter and pop singer, starts a successful international career in 1984 with the production sung by him, the worldwide disco classic hit "Slice Me Nice" (with the comedy-satire-text from US Jazz-musician Todd Canedy), makes it with his second hit "Chinese Eyes" onto 2nd place of the US Billboard Dance Charts and had "Top 10 of the Year" in the the US Billboard Dance Charts in 1985 with "Chinese Eyes" (# 2) and "Come Inside" (# 2)

Fancy had a top hit in Spain with "Bolero" and, for instance, from the mid 80s in Germany with 9 of his singles - in a row - he landed in the Media Control Singles hit-charts (D, A & CH) The artist had 6 Albums in the Media Control LP-Charts. His timeless and biggest hit "Flames Of Love" has been heard worldwide since 1988.

A key encounter was a breakfast with Jimi Hendrix in Munich (1967) and a studio-session with Giorgio Moroder in Berlin (1969), Fancy was author and producer of more than ten italo disco artists in the 70's & 80's, and he is the remix-producer of Michael Jackson 's "Mind Is The Magic" & Pet Shop Boys "West End Girls" and "One More Chance"

Fancy builds an outdoor enclosure in Slovakia for big cats born in civilisation, humanitarian aid for street kids in Transilvania and was Guest Lecturer at the Munich Public University. In numerous countries Fancy has received awards and honours for his life's work.

The artist surpassed the Scorpions' record 2010 (the highest pop concert in La Paz, Bolivia) July 2016 and March 2017 in the stadium of La Paz and high above La Paz in El A lto at over 4000 m elevation with two open-air shows! "Flames Of Love"