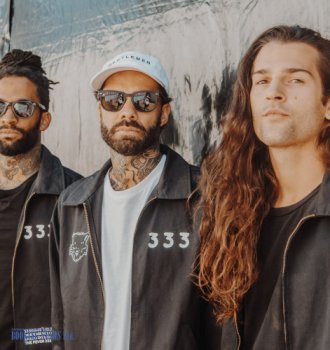 Fever 333 is a rock band, which originated in Inglewood, California in 2017. Its lineup includes an ex-vocalist of letlive, Jason Butler, a guitarist from The Chariot, Stephen Harrison, and an ex-member of Night Verses Arik Importa. The group uses many genres, including rapcore and post-hardcore.

Initially, the musicians called their group The Fever 333. However, “The” was later dropped. The band was born right after Jason Butler left letlive and decided to create his own project. Jason shared his plans on his Instagram account. Butler talked about his love for music and the desire to conquer new horizons as a musician. He wasn’t afraid to start his career from scratch because he viewed it as a necessary step.

In August 2017, the band released its debut single, "We're Coming In". Four days later, the artists presented their second single “Hunting Season”, which was recorded with the assistance of a famous drummer Travis Barker from blink-182. The third single, “Walking In My Shoes” came out in November 2017.

After the release, the band decided to give an improvised concert on a truck at the parking lot, near a popular donut shop in Inglewood. Musicians performed their first three songs. They didn’t announce the show. Arik and Stephen hinted to their fans about it a couple of days earlier. It’s worth noting, that the show turned out to be successful. The musicians were noticed.

In March 2018, the band presented its debut EP. It was Made an America. The album came out with the assistance of Roadrunner Records. Fever 333 didn’t announce the release of their album in advance. That’s why fans (even though the band didn’t have that many at the time) were pleasantly surprised. Later, the leading single from the EP was nominated for a Grammy Award as the Best Rock Performance. The EP featured seven songs, including "Made an America", "We're Coming In", "Hunting Season", "(The First Stone) Changes", "Walking in My Shoes", "Soul'd Me Out", and "POV".

In May, Fever 333 recorded a new single “Trigger”, in which the artists talked about murder and gun problem in the USA. Soon after that, they presented a remix to “Made an America”, which was recorded with the assistance of a rapper Vic Mensa and their old friend Travis Barker. The music video for the remix was uploaded to the band’s YouTube channel. The black and white video features the vocalist Butler, who performs in a warehouse. Barker and Mensa join him later. The video collected more than 600,000 views on YouTube. Many fans started trying to book Fever 333 for private events.

In November 2018, musicians presented a new single “Burn It”. At the same time, they announced the release of the debut LP, Strength in Numb333rs. It came out at the beginning of 2019. The artists took the time to explain the concept of the album on their Facebook page. The LP came out with the assistance of Roadrunner Records and 333 Wreckords Crew.

In 2018, Fever 333 embarked on a tour with the popular band, Bring Me the Horizon. They performed in Europe and the UK. The tour helped the group become even more popular and acquire fans abroad.

Both critics and fans of the band gave positive reviews to its debut LP. The Wall of Sound magazine rated it nine out of ten, noting that the musicians had all chances to help create a generation that could make better decisions in their lives.

However, ipod044 Reviews gave the album 6.5 out of 10, noting that even though the group has excellent potential, it needs to work on the material and come up with a few fresh ideas.

In one of the interviews, Jason Butler noted that he was always inspired by such popular hip-hop and rock groups like Rage Against the Machine, Public Enemy, and Black Flag. As a result, Fever 333’s songs discuss social and political problems, including homophobia, racism, and sexism.