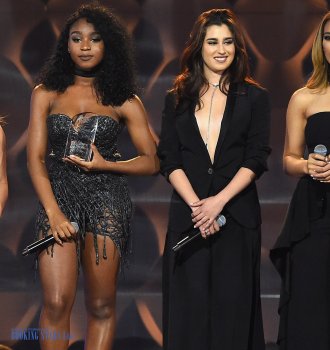 Girls band Fifth Harmony is a young band. They started their music career not a long time ago. In 2013 there was the second season of X-factor show, and Fifth Harmony appeared. The band got the third position at the show and became the most discussed participants of the season. The name of the band was chosen by Internet-users via online-voting.

When the second season of X-factor was finished, the girls released their debut single «Miss Movin on» under Syco Music and Epic Records (Fifth Harmony signed to the labels). They also had their own music tour in the USA.

One year later – in 2014 – the girls band performed as a supporting artist at Demi Lovato`s world tour. More over, the singers also sang Mariah Carey`s track «All I want for Christmas is you» in the White House in Washington.

«Reflection» was the band`s first album which was released in 2015, and it got lots of fans and it was extremely successful. It went off like hot cakes and hit#5 on Billboard 200. The album had three hot singles by Fifth Harmony – «Sledgehammer", "Boss", "Worth it". The track «I am in love with a monster» was a soundtrack for a cartoon «Hotel Transylvania».

The second album called 7\27 was launched in 2016 and it had its hit-song under the name «Work from home». The track saw positive critical reception and reached the top 10 on Billboard Hot 200. The same year the girls were announced by Billboard the hottest singers aged under 21.

In 2017 the band launched their third work «Fifth Harmony». «He like that» is the most successful and  well-known track from the album.