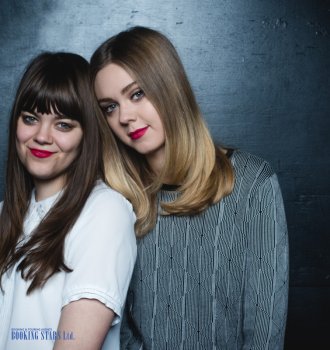 Soderberg sisters Johanna (1990) and Klara (1993) were born in Stockholm. Both girls loved singing since childhood. Klara wrote her first song when she was just six. In 2005, Klara’s parents bought her a guitar. The aspiring artist easily learned how to play it.

The two girls made a decision to sing together and came up with a name for their duo. It came from the first words that they randomly pointed to in a dictionary. That’s how First Aid Kit appeared. Young girls wrote and sang their own songs. They preferred the folk genre.

In April 2007, they started uploading their songs to the MySpace account. The same year, the sisters sent their song “Tangerine” to the Stockholm radio, which immediately played it. The duo became popular and many fans tried to book First Aid Kit for their events. They also got a few offers from the recording labels.

In October 2007, the girls gave their first concert in PUNKTmedis youth library in Stockholm.

In 2008, the duo signed their first contract with Rabid Records. In April, they released their debut EP Drunken Trees. In August, First Aid Kit uploaded the cover version of the band’s Fleet Foxes song "Tiger Mountain Peasant Song" to YouTube. The band’s leader Robin Pecknold saw the song and reposted it on the group’s channel. The sisters’ popularity went through the roof. Soon they signed a contract with Wichita Records. The duo made a decision to take a leave from school and go on a world tour.

At the beginning of 2010, the band presented its first studio album The Big Black and the Blue, which was initially released in the UK. In May, it appeared in the USA. The young artists went on a promotional tour and gave about 100 concerts. They were noticed by the famous folk musicians Conor Oberst and Mike Mogis, who offered them collaboration.

In January 2012, First Aid Kit released their second LP The Lion's Roar, which was produced by Mogis. The LP topped Swedish Albums Chart, reached the 35th position on UK Albums Chart and the 65th spot on Billboard 200. The album earned several platinum and gold certifications in the UK and Sweden. In November, the duo received two awards from Swedish Music Publishers Association.

In 2013, the album The Lion's Roar brought the sisters a Nordic Music Prize as "Best Nordic 2012 Album". At the same time, they earned four Swedish Grammis awards.

In 2014, Conor Oberst presented his sixth studio album, Upside Down Mountain. Six out of 13 songs featured in the LP, were recorded with the Soderberg sisters.

In June 2014, First Aid Kit released their third album, Stay Gold. It came out under Columbia Records. Just as the band’s previous LP, it debuted on top of Swedish Albums Chart. It also reached the 11th spot on UK Albums Chart and 23rd spot on Billboard 200. The album brought the band several awards and nominations.

In 2015 and 2016, the sisters were touring the world and performing at the music festivals. In 2017, they came back to the studio to work on their fourth LP.

The next album Ruins came out in January 2018. It topped Swedish Albums and Scottish Albums Charts and reached the 2nd position on US Folk Albums Chart.